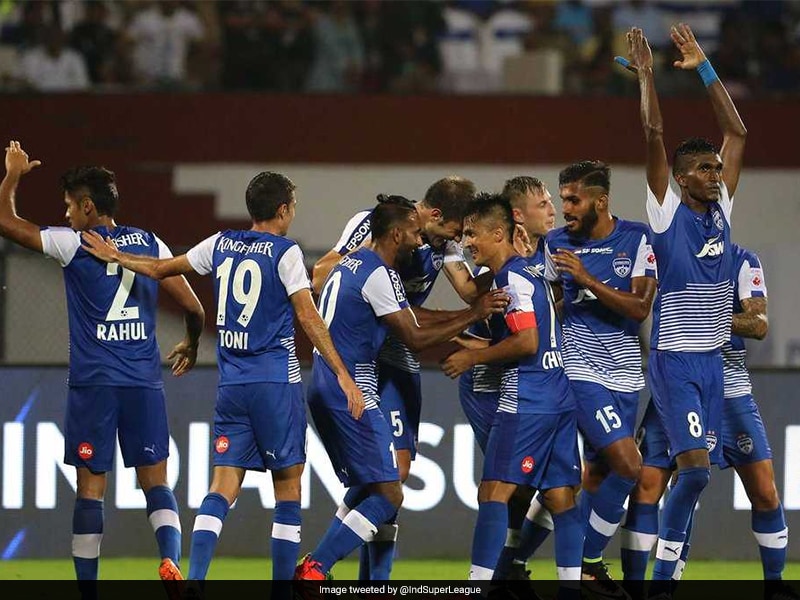 Bengaluru FC had a satisfying Indian Super League debut as they beat Mumbai City FC 2-0 in their opening encounter with Spaniard Eduardo Martin Garcia and skipper Sunil Chhetri on target. Garcia scored in the 67th minute off a set-piece movement while Chhetri cashed in on a defensive blunder from Mehrajuddin Wadoo in the third minute of stoppage time to get full points for the 'Blues' in what was their first ever appearance in the cash-rich league. After a barren first-half, it was former Zaragoza B team player Edu, who broke the deadlock. After playing a one-two with Udanta Singh off a corner, he took a left-footer as Mumbai goalkeeper Amrinder Singh was beaten at near post.

Chhetri, who was shown a yellow card in the second half for showboating in order to get a penalty, finally got his name on the scoresheet during the dying moments.

Chasing a long ball, Chhetri put pressure on stopper Mehrajuddin, whose miscommunication with a surging Amrinder saw the Indian captain latch onto the free ball before slotting it home with precision.

Chhetri was awarded Man of the match for his brilliant performance as he was a livewire upfront.

The home team dominated the proceedings by making several attempts at the goal but Amrinder Singh kept the sheet clean during the first 45 minutes.

Udanta spurned an oppurtunity in the 43rd minute as he crossed the ball instead of aiming at an open goal after Chhetri picked up the pacy Udanta on wide right. The cross was intercepted by Marcio Nascimento Rozario much to the relief of Amrinder.

Although BFC played agressively, their centre backs Juanan Gonzalez and John Johnson flanked by side backs Harmanjyot Khabra and Rahul Bheke performed admirably. In the 23rd minute, Fedor sent a cross from right flank but Chhetri's volley was off the mark.

The shots of Chhetri and Lenny Rodrigues, in 27th and 29th minutes also went haywire.

In 41st minute, Fedor once again shot straight at the goalkeeper after Chhetri won the ball in midfield and freed him in the attacking third.

Comments
Topics mentioned in this article
Bengaluru FC Mumbai City FC Sunil Chhetri Football Indian Super League
Get the latest updates on ICC T20 Worldcup 2022 and CWG 2022 check out the Schedule, Live Score and Medals Tally. Like us on Facebook or follow us on Twitter for more sports updates. You can also download the NDTV Cricket app for Android or iOS.