Qatar has agreed to the AIFF's request to waive the mandatory 10-day hard quarantine for the Indian footballers after reaching there. The players will have a preparatory camp of nearly two weeks in a bio-bubble in Qatar before the first match on June 3. 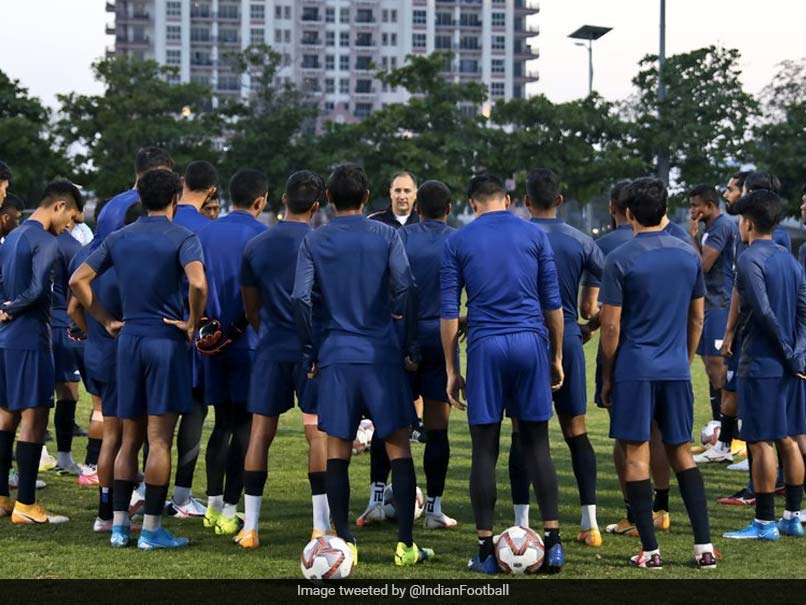 The Indian football team will leave for Qatar on May 19.© Twitter

The Indian football team will leave for Qatar on May 19 after the gulf country, in a big relief, accepted All India Football Federation's (AIFF) request to allow its players to train there ahead of the 2022 World Cup Qualifiers next month. Not only that, Qatar has even agreed to the AIFF's request to waive the mandatory 10-day hard quarantine after reaching there. The players will have a preparatory camp of nearly two weeks in a bio-bubble in Qatar before the first match on June 3.

"We are planning to fly the team on May 19 evening. There will be no quarantine (of the players) and they will be in a bio-bubble," AIFF general secretary Kushal Das told PTI on Saturday.

He said the players will assemble in New Delhi and they will be tested for COVID-19 before their departure to Qatar.

India is already out of reckoning for a 2022 FIFA World Cup berth but is still in contention for a 2023 Asian Cup spot in the joint qualifiers.

Qatar was picked by the Asian Football Confederation in March as the centralised venue to host the remaining Group E matches owing to the coronavirus-related travel and quarantine restrictions.

Das had on Wednesday said the national team cannot train in the country right now given the COVID-19 surge and it was considering foreign options for a camp ahead of the World Cup qualifying round matches.

A national camp under head coach Igor Stimacwas earlier planned in Kolkata from May 2 to 21. After that, the team was to leave the country on May 22 for Dubai where a week-long camp as well as a friendly match -- not international -- was planned.

But all those plans were put to rest in view of the devastating second wave of COVID-19 pandemic in the country.

The Indian team is currently fourth in the group standings with three points from five matches.

From the remaining fixtures, the team will hope to collect as many points as possible and finish third so that it can seal automatic qualification for the 2023 Asian Cup qualifying third round.

In March, India played their first international matches since November 2019 -- friendly games against Oman and the UAE in Dubai. India held Oman 1-1 on March 25 but suffered a 0-6 defeat against the UAE on March 29.

India Football
Get the latest updates on India vs South Africa and check out  Schedule, Results and Live Score. Like us on Facebook or follow us on Twitter for more sports updates. You can also download the NDTV Cricket app for Android or iOS.