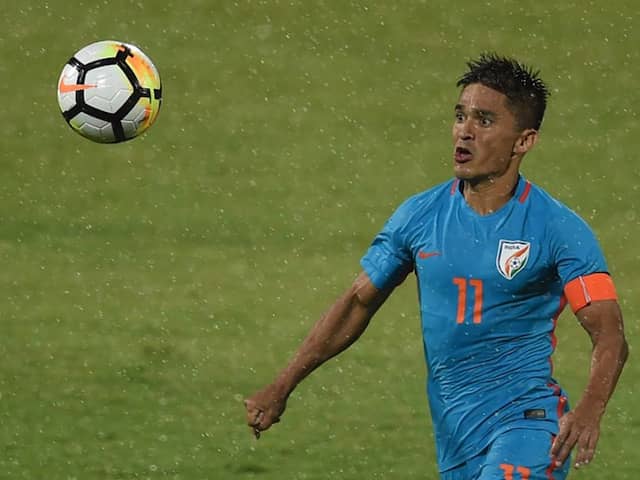 Captain Sunil Chhetri will play his landmark 100th international match as India host Kenya in the Intercontinental Cup match on Monday at the Mumbai Football Arena in Mumbai. With 59 goals to his credit, the talismanic striker is India's all-time leading scorer. Another win at the Mumbai Football Arena will ensure the home team's passage to the final of the tournament, which is being used as preparation for next year's Asian Cup. The 97th ranked side is on a high having drubbed Chinese Taipei 5-0 in the tournament opener. Chhetri was in imperious form, scoring his third hat-trick in international football, and he would look to continue in the same manner against the physical stronger African team, which likes to attack.

21:56 IST: And its over. India outclass Kenya 3-0 after a stellar Sunil Chhetri hits a brace

21:32 IST: 71' GOAL! Jeje scores India's second goal. What a goal.Superb finish on the half volley. India are two nil up and are now in complete control of this tie | India 2-0 Kenya

21:29 IST: 68' GOAL! Sunil Chhetri scores. Stadium goes berserk. Brute power at the top corner. Keper gets his hands on the ball but the the ball was struck with extreme force |
India 1-0 Kenya

21:25 IST: 62' India CHANCE! Pronoy from the distance and the Kenya keeper saves it. What a fantastic strike by him and an equally stunning save | India 0-0 Kenya

21:24 IST: Sandesh Jhinghan has been solid at the back for the men in blue.

21:23 IST: 58' Another opportunity for Indian skipper Sunil Chhetri after his shot from inside the box goes wide of the goal.

21:20 IST: 56' Free kick for India! Jeje in trouble there. But a foul on Jeje earns India a good free kick. Chhetri steps up to take it. Hits the ball and the ball safely lands out.

21:17 IST: Good attacking display by India. Chhetri could not control it well. Perfect cross by Halicharan. That should have been buried in by the Indian skipper | India 0-0 Kenya

21:13 IST: 52' No problems for India so far. But they need to do something soon. Jeje shoots rom distance but its off. India need to get on the ball more. They need their midfielders get in the match more.

21:08 IST: 46' The ground has soaked up the water and the players are able to stitch passes together.

AIFF President @praful_patel is in the stands to cheer for the National Team and be a part of the momentous occasion. #Chhetri100 #INDvKEN #WeAreIndia #BackTheBlue #AsianDream pic.twitter.com/7qsDupaSHs

20:46 IST: Some good inter link play between Udanta and Thapa on the right flank for India.

20:43 IST: 40' Indians are digging deep as Kenyans are playing long balls. Udanta and Thapa are trying to create a positive move down the right flank but it gets cleared.

20:40 IST: Kenya players are playing long balls now. But the Indians players are dealing with them well | India 0-0 Kenya after 39 minutes

20:35 IST: 33' The game's pace is getting affected a great deal due to the heavy downpour.

20:34 IST: 27' Gurpreet Sandhu comes out to clear the danger but it is becoming extremely difficult for the players after formation of water pools in the ground.

20:29 IST: 25' After Pritam Kotal Sandesh Jhingan comes to the team's rescue. Score remains same as both teams trying their best to stitch passes. The Blue Tigers are living dangerously at the moment.

20:25 IST: 22' Chettri tries his luck from distance. A good shot but misses the target.

20:23 IST: 21' Sandesh Jhingan did well there. Wrestled the Kenyan player and it is goal kick for India.

20:21 IST: 20' Anirudh Thapa and Udanta Singh linking up well. They are building up the attacks from the middle. India 0-0 Kenya

20:17 IST: 15' Pronoy Halder wins the ball well in the middle but gives it away. It is becoming tough for the players to hold the ball due to the heavy rains.

20:16 IST: 14' Bollywood actor Abhishek Bachchan cheering the men in blue from the stands.

20:10 IST: 10' The game has been going on a shaky pace at the moment due to rains but there's no dearth of support from the stands as they are vociferous in their chants.

20:08 IST: 6' Free kick for Kenya. Udanta Singh breaks on the counter for India, no one in the middle for him. Great sprint by the Indian attacker.

20:05 IST: 3' Kenya have the majority of possession at the moment. No particular threat but they are having more of the ball.

20:01 IST: 1' A good start by Kenya. A good offensive movement by the African nation.

19:58: What a moment for Chhetri. His 100th international cap. We are moments away from the kickoff.

19:17 IST: Sunil Chhetri being accorded the guard of honour by his teammates.

18:51 IST: Teams have started arriving at the stadium.

This is a proud moment for me, admits @chetrisunil11 #Chhetri100 #INDvKEN #WeAreIndia #BackTheBlue #AsianDream pic.twitter.com/fu1eUojJ9i

18:30 IST: Hello and welcome to the live blog updates of the third Intercontinental Cup match between India and Kenya.

India coach Stephen Constantine has an option upfront in Balwant Singh and, depending on the situation of the match, he can be considered. If the Chhetri-led Indian forward line is able to strike at will again, then the Kenyans will have some tough time at the back. India have an array of attacking midfielders like Udanta Singh, Anirudh Thapa and Pranoy Halder, who clicked in the last game. Udanta and Pranoy scored against Chinese Taipei and they will certainly start on Monday. India has an equally strong defence with the experienced Sandesh Jhinghan and Pritam Kotal manning the backline. Add to it the likes of Narayan Das and Subhashis Bose, and the line-up looks solid.

India Football Team Sunil Chhetri Football Live Score Live Blogs Football India vs Kenya, Match 3
Get the latest Cricket news, check out the India cricket schedule, Cricket live score . Like us on Facebook or follow us on Twitter for more sports updates. You can also download the NDTV Cricket app for Android or iOS.