I-League: Joseba Beitia and Nongdamba Naorem scored in the second half to give Mohun Bagan a 2-0 win against Real Kashmir in Srinagar. 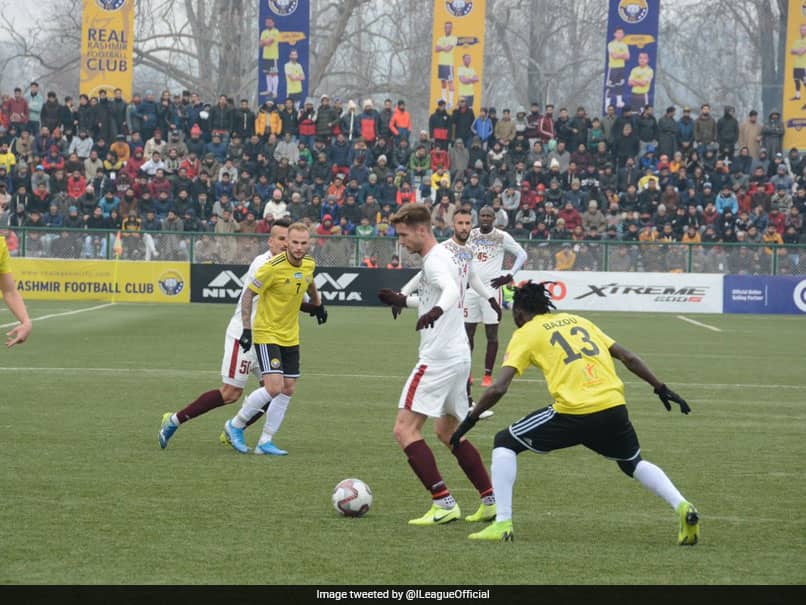 Mohun Bagan sit atop the I-League table with 10 points from five games.© Twitter

Kolkata giants Mohun Bagan registered a convincing 2-0 win over Real Kashmir FC (RKFC) in an away game to climb to the top of the Hero I-League table on Sunday. The game started at 11.30 am at the TRC Ground in Srinagar because of the biting cold, but the harsh weather conditions failed to stop the visitors from recording the victory. After a goalless first half, Joseba Beitia (71st minute) and Nongdamba Naorem (73rd) scored for the Kolkata giants in a span of two minutes, shattering the hopes of the home fans.

Mohun Bagan had the lion's share of possession and more shots on target but the home side had more attempts in total and five more corners in a game which could have gone either way.

Mohun Bagan coach Kibu Vicuna started the game with newly-signed Senegalese striker Baba Diawara and brought in Dhanachandra Singh in the backline with Gurjinder Kumar, who was out suspended.

The visitors were strong from the starting whistle and notched up as many as three corners in the space of first six minutes.

Talented winger Nongdamba Naorem then had his first chance of the game in the 22nd minute, but his left-footer from inside the box failed to cause any problem for Real Kashmir goalkeeper Phurba Lachempa.

Both sides had the chance to score but the first half remained goalless.

In the second half, while Mohun Bagan continued to dominate possession, the home side had better scoring chances in the opening 20 minutes.

Bazie had a shot on the turn from deep inside the Bagan box in the 49th minute but the effort sailed over the crossbar. Then Sankar Roy made the save of the game in the 65th minute to deny Mason Robertson, who attempted a header from close quarters, from a Higginbottom set-piece.

By now, Real Kashmir had thrown in Ivorian striker Gnohere Krizo in the mix and had stepped up their attacks.

However, it was the visitors from Kolkata who turned the match on its head within the space of two minutes.

First, off a long Dhanachandra Singh throw from the right-flank, Daniel Cyrus somehow managed to deflect the ball into the path of an onrushing Beitia. Beitia positioned his body perfectly to meet the loose ball with his right foot and powered his shot into the Real Kashmir net.

The ball went in off the keeper and Bagan were 1-0 ahead.

A couple of minutes later, another young Mohun Bagan talent Sk Sahil showed outstanding vision and found substitute PM Britto with a wonderful through ball. Britto rushed clear and floated the ball back in. Naorem, who had an outstanding game, was at the end of this one and blasted a perfectly-connected volley into the back of the net to double Mohun Bagan's lead.

Real Kashmir threw everything in a bid to come back into the game. Loveday Okechukwu missed their best chance with less than five minutes to go. Krizo too had an attempt from close range but to no avail.