I-League: Dennis Antwi came to Gokulam Kerala's rescue in a close encounter against Mohammedan SC. The win has also taken them to top of the table. 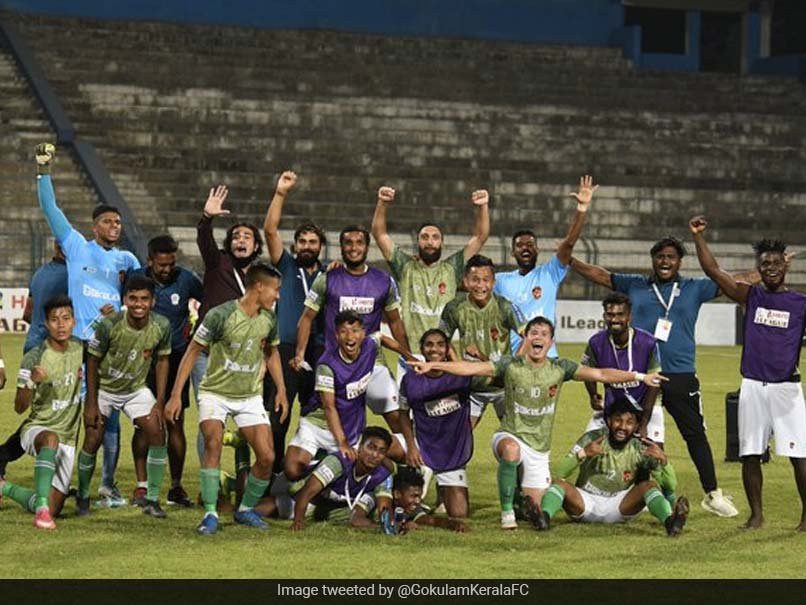 I-League: Gokulam Kerala players celebrate after going to top of the table.© Twitter

Gokulam Kerala FC rode Dennis Antwi's brace to defeat Mohammedan SC 2-1 at the Kalyani Municipal Stadium on Sunday to take the Malabarians to the top of the I-League table. A brace by Dennis Antwi helped the Malabarians to go level on points (26) with Churchill Brothers and TRAU at the top of the I-League table, after Sujit Sadhu had pulled a goal back for the Black Panthers, late in the second half. With this win, the I-League will be decided on the last day of the season with three teams in contention to lift the trophy -- Gokulam Kerala, Churchill Brothers, and TRAU FC. This result also ends any title hopes that Mohammedan Sporting may have harboured.

With Churchill and TRAU sharing points earlier in the day with a 1-1 draw, Gokulam Kerala FC had to win their match against Mohammedan SC, in order to stamp their authority in the I-League title race. The Malabarians started the match on an attacking note and were desperate to take the early lead. In the 3rd minute, Dennis Antwi held up play and released a ball for Mayakannan, rushing onto goal. The latter's powerful strike however went whiskers past the goal.

Mohammedan SC were pinned by Gokulam Kerala as the Malabarians played their usual football of holding on to possession and building play up from the back. In the 15th minute, much against the run of play, the Black Panthers had a chance to take the lead. Shilton D'Silva latched onto a corner kick and released a thunderous volley that was saved well by the opposition goalkeeper.

The Dennis Antwi show began in the 19the minute and at the end of half-time, two goals by the forward aided Gokulam to go in the half-time leading 2-0. First, in the 19th minute, Antwi latched onto a long ball by Sebastian and controlled it well, shielding it away from the opposition defensive line. In a remarkable fashion, he turned inside out and sent a powerful shot into the bottom corner to hand the Malabarians the lead.

The Ghanaian made it 2-0 in the 33rd minute. He turned Faisal Ali inside out once more and blasted a venomous shot past the opposition goalkeeper to double Gokulam's lead.

Mohammedan SC had a late chance in the first half but Faisal Ali's strike from distance made for easy picking by the opposition goalkeeper.

After Gokulam led at half-time, the Malabarians upped the ante and hunted to take an unassailable lead. However, their efforts were cancelled out by some good defending by Mohammedan SC as the match evolved into a battle for midfield.

The Black Panthers lacked creativity upfront as Pedro Manzi and Azharuddin Mallick were often left isolated, unable to link play up with the midfield. Coach Sankarlal Chakraborty made some changes in the second half and brought on Sattyam Sharma for Manzi to liven things up in the attacking department.

In the 65th minute, the Malabarians once again cajoled a good opportunity to extend their lead after Sharif Mohammed's rocket-of-a-shot from distance was met with an equally good save by substitute goalkeeper Jafar Mondal. Perhaps the best chance of the match fell to substitute Gani Nigam in the 73rd minute when he cut inside the box and released a curling left-footed attempt. Gani's effort was however met with a world-class Ubaid save as the Malabarians survived a dangerous spell of play.

With Gokulam Kerala FC comfortably in the driver's seat and Mohammedan SC reduced to rare chance, the Malabarians kept hold of possession in an attempt to see the match through. The Black Panthers tried to breach the opposition citadel with a few half-chance in the dying embers of the match but failed to cajole anything substantial until the 85th minute when Sujit Sadhu headed Tirthankar Sarkar's cross into the back of the net to pull a goal back.

The goal spurred the Black Panthers and they went on frequent attacks to grab an equaliser in the dying embers of the match. However, Gokulam Kerala FC committed bodies in defence and saw out the match as the full-time scoreline read 2-1 in their favour.