How To Celebrate A Title In Times Of Coronavirus?

The German league (DFL) said, in its rules governing the restart, that the winners' trophy, will not be awarded until the end of the season, on June 27. 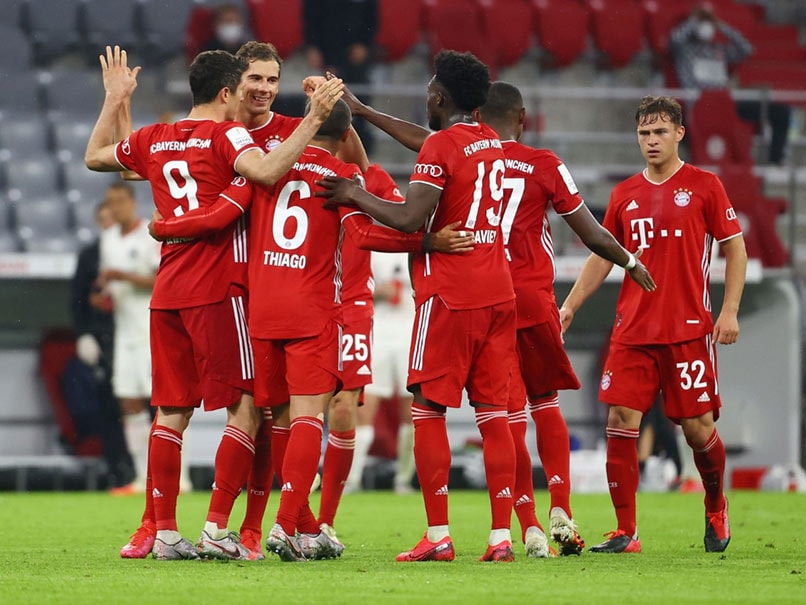 Bayern Munich can be crowned German champions on Tuesday with victory at Werder Bremen.© AFP

Bayern Munichcan be crowned German champions on Tuesday with victory at Werder Bremen, but any festivities will be reduced to a minimum to respect the safety measures in place to combat the coronavirus.

When will Bayern be declared champions?

The German league (DFL) said, in its rules governing the restart, that the champion and relegated sides will not officially be declared until the last round of matches. In theory, if the league was interrupted again by the pandemic, the final standings could be reviewed.

As a result, the "Schale", or winners' trophy, will not be awarded until the end of the season, on June 27 when Bayern play Wolfsburg.

What kind of ceremony awaits the champions?

The DFL will not reveal its plans until the champions are known, but any celebrations will be subdued given the hygiene measures in place.

These rules place a limit of 100 people allowed in the "interior zone", the pitch and substitutes' bench. That means Bayern chairman Karl-Heinz Rummeniggeand other club officials, who have clearance to be in the stands, will not be able to get down on the pitch.

In keeping with rules since the restart, there will be no supporters or family members present either.

What happens to the traditional beer shower?

The traditional beer shower, to which Bayern have grown accustomed, is also banned under current league regulations.

"I would be happy if it didn't take place this year," said a smiling Hansi Flick, the Bayern coachwhose first wheat beer drenching will have to wait.

What about the town hall parade?

The customary trophy presentation in front of supporters at the city's town hall has been cancelled in advance.

"But I am sure an appropriate honour will be found if Bayern should win the title," he added, without giving further details.

Can Bayern celebrate as a group?

The team and staff members will be able to celebrate together, having been regularly tested for the virus and working in contact with each other for weeks.

If club directors, such as Rummenigge or former president Uli Hoeness wish to be involved, they must return two negative test results beforehand. Families and friends are not expected to be invited, however.

With the German Cup final to come on July 4, Bayern must continue to follow the league's strict health protocol until they meet Bayer Leverkusen in Berlin.

Bayern München Football
Get the latest updates on Fifa Worldcup 2022 and check out  Fifa World Cup Schedule, Stats and Live Cricket Score. Like us on Facebook or follow us on Twitter for more sports updates. You can also download the NDTV Cricket app for Android or iOS.