Harry Kane Spot On As Tottenham Hotspur Down Chelsea

Harry Kane fired Tottenham Hotspur a step closer to the League Cup final with a 1-0 win over Chelsea in the semi-final first leg on Tuesday. 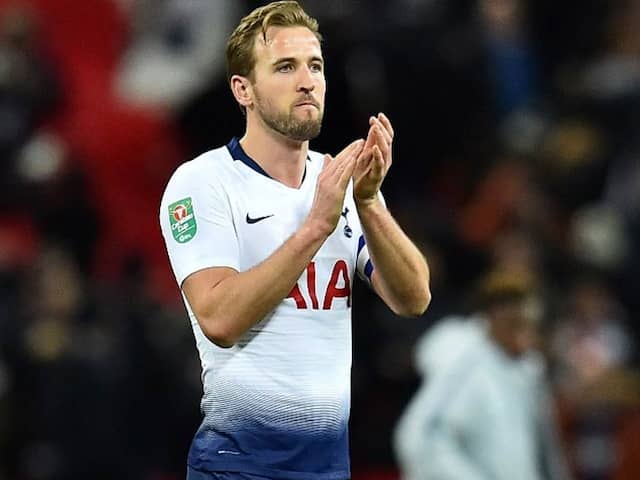 Tottenham are chasing their first trophy since winning the 2008 League Cup.© AFP

Mauricio Pochettino hailed Tottenham's growing maturity as Harry Kane fired them a step closer to the League Cup final with a 1-0 win over Chelsea in the semi-final first leg on Tuesday. Pochettino's side are chasing their first trophy since winning the 2008 League Cup at the expense of Chelsea. Kane's first-half spot-kick, awarded via VAR, settled a hard-fought encounter to keep Tottenham on course for a first League Cup final appearance since their 2015 defeat against the Blues.
That loss was one of several missed opportunities for Pochettino to win the first silverware of his promising managerial career.

This was an important step towards ending that drought. "We were very competitive. The effort was massive. Whether or not we win titles, I'm so proud to have this squad," Pochettino said.
"We played one of the best teams in Europe. To win this type of game is an amazing experience for us to be more mature."

Pochettino challenged Tottenham to finish the job in the second leg at Stamford Bridge on January 24.

"Of course it is only half-time in the tie. We have only a little advantage," he said.

"It is going to be different in the second leg. We have to show we can beat them there and go to the final."

It was another frustrating night for Chelsea, who recovered from a sluggish start to dominate the second half without turning their possession into goals -- a familiar tale of woe for Maurizio Sarri's men.

"We deserved more. We played better than them and were in control of the match," Sarri insisted.

"I'm really disappointed with the result but really happy with the performance. It is one of the most important performances of the season for my team."

And he almost announced his return to the competition in spectacular fashion when his overhead kick from Kieran Trippier's cross forced Kepa Arrizabalaga into action.

Tottenham were the more vibrant and cohesive force and their impactful start was rewarded with Kane's 27th-minute opener.

Kane's well-timed run beat the Chelsea offside trap and Kepa came hurtling off his line and clattered into the striker.

After a delay while VAR confirmed Kane was onside, Oliver awarded a spot-kick and the England captain stepped up to smash his shot past Kepa for his 20th club goal this season.

Kane's seventh goal in his last six appearances made him Tottenham's fourth all-time highest scorer with 160.

Chelsea went close to levelling when Marcos Alonso's cross reached N'Golo Kante, who volleyed against the near post from an acute angle.

Chelsea's Callum Hudson-Odoi started for the second successive game as Sarri tries to convince the 18-year-old English winger to commit to the Blues amid reports of a bid from Bayern Munich.

Hudson-Odoi, who has 18 months remaining on his current contract, showed a flash of his potential on the right flank, cutting inside for a cross that deflected off Danny Rose and had to be tipped onto the woodwork by home goalkeeper Paulo Gazzaniga.

With Alvaro Morata struggling with an injury and Olivier Giroud also not fully fit, Sarri had resumed his experiment of playing Eden Hazard as his central striker.

But Hazard, so influential on the flanks, has expressed some doubts about his suitability for the 'false nine' role and at times he was rendered impotent by Chelsea's failure to get him the ball in dangerous areas.

Kane, a natural centre forward, was far more at home as the focal point of Tottenham's attacks and he almost doubled their lead soon after half-time with a fierce long-range drive that Kepa pushed away.

Kante responded with a powerful effort of his own, but Gazzaniga was equal to the France midfielder's threatening strike.

Showing more poise as Hazard's influence finally grew, Chelsea had the better of the second half.

Christensen should have equalised from Ross Barkley's flick, yet the Danish defender somehow prodded wide from close range.

Chelsea Football Harry Kane
Get the latest Cricket news, check out the India cricket schedule, Cricket live score . Like us on Facebook or follow us on Twitter for more sports updates. You can also download the NDTV Cricket app for Android or iOS.