Dyke revealed plans to set up the commission in a speech last month, when he referred to the "frightening trend" of English players being supplanted by foreigners in the Premier League. 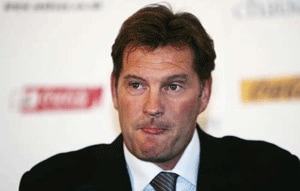 Football Association chairman Greg Dyke announced on Wednesday that former England manager Glenn Hoddle will be part of a commission investigating how to improve the fortunes of the national team.

Dyke revealed plans to set up the commission in a speech last month, when he referred to the "frightening trend" of English players being supplanted by foreigners in the Premier League.

Only around 30 percent of the players currently playing in the English top flight are eligible for selection by England coach Roy Hodgson.

"Glenn is going to be on the commission and we'll name some more people today," Dyke said.

Dyke said that the Premier League had rejected an offer to take up a role on the commission.

"The Premier League decided that they didn't want to be on it," he said at the Leaders in Football conference in west London.

"They were very helpful, they've said they'll help all they can, they have quite a good research base, access to any statistics and figures we want, but they don't want to be on the commission itself.

The England team have not reached the semi-finals of a major tournament since the 1996 European Championship, which they hosted, and the commission will investigate the reasons for their recent failings.

Dyke, who took up his role in July, has set the team the target of winning the 2022 World Cup in Qatar.

"What's at stake isn't just the future of the England team, but the fundamental right of English players to rise as far as their talent will take them," he said.

"That right is now denied to them. We have become a finishing school for the rest of the world at the expense of our own players."

Hoddle, 55, spent three years as England manager and led the team to the last 16 at the 1998 World Cup in France, where they lost on penalties to Argentina.

The former Tottenham Hotspur and Monaco midfielder lost his job a year later after suggesting in a newspaper interview that disabled people were being punished for sins committed in a previous life.

He later apologised, saying he had made a "serious error of judgement".

Hoddle said he was "delighted and honoured" to be involved with the commission.

"I have already spoken to Greg Dyke a couple of times now and at last I have a sense that there is someone in charge who is genuinely trying to change things," he told BT Sport.

"If he wants my help in and around these issues, then I am willing to give it. It hurts me to see promising young English players being overlooked for average foreign players."

Dyke also revealed that he was looking into the issue of dual-nationality, after Hodgson admitted the FA was investigating the eligibility of Manchester United's Belgium-born teenager Adnan Januzaj.

The 18-year-old winger shot to prominence at the weekend with a brace of goals in a league game against Sunderland.

He qualifies to play for the country of his birth, as well as Albania, Kosovo, Serbia and Turkey, and will qualify to represent England on residency grounds in 2018.

England midfielder Jack Wilshere said on Tuesday that "the only people who should play for England are English people", but Dyke says it is the FA's duty to explore means of strengthening the national team.

"The idea that somebody who is not born in this country cannot play here is not real, but how long should they be here?" he said.

"But then you've got to look at what FIFA say, what are the FIFA rules on it? The FA are looking at what we think is appropriate and that is now what we are going through the process of."