Gianluigi Buffon passed the previous record of 647 appearances he jointly held with AC Milan great Paolo Maldini as he started the game at the Allianz Stadium. 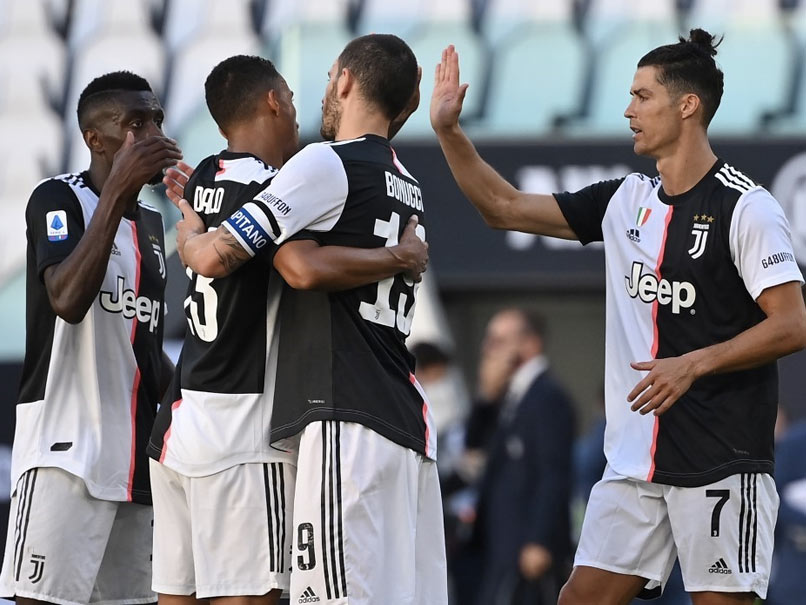 Cristiano Ronaldo became the first Juventus player to score 25 Serie A goals in a season in 59 years.© AFP

Gianluigi Buffon set a new Serie A appearances record on Saturday as Juventus beat Torino 4-1 in the Turin derby to move seven points clear at the top of the table. The 42-year-old goalkeeper Buffon passed the previous record of 647 appearances he jointly held with AC Milan great Paolo Maldini as he started the game at the Allianz Stadium.

Cristiano Ronaldo was among the scorers, becoming the first Juve player to score 25 Serie A goals in a season in 59 years, as Maurizio Sarri's men moved further clear of second-placed Lazio, who host in-form AC Milan later on Saturday.

It was the eighth Serie A appearance this campaign for Buffon, with Polish international Wojciech Szczesny usually the defending champions' number one.

The record comes 25 years after Buffon made his Serie A debut for Parma and 19 years after he first signed for Juventus.

The hosts wasted little time in taking the lead as Paulo Dybala put them ahead in the third minute with an excellent individual goal, collecting Juan Cuadrado's pass before jinking past two defenders and firing a left-footed shot into the roof of the net.

The advantage was doubled just before the half-hour mark as Ronaldo charged forward before laying the ball off for Cuadrado to drill a low drive into the bottom corner.

Torino gave themselves hope when Andrea Belotti scored a penalty past Buffon in the sixth minute of first-half injury-time.

Simone Verdi was denied an equaliser early in the second half by the linesman's flag, but Ronaldo put the game to bed in the 61st minute with a brilliant free-kick.

It was the first time the five-time Ballon d'Or winner had scored a free-kick in Serie A and it was his 25th league goal of the campaign, making the Portuguese the first Juventus player to achieve that feat since Omar Sivori in the 1960-61 season.

Juve were not done there and made it four with three minutes remaining as Torino defender Koffi Djidji put through his own net.

Torino remain 15th in the table, six points above the relegation zone with eight matches to play.

Cristiano Ronaldo Football Gianluigi Buffon
Get the latest updates on Fifa Worldcup 2022 and check out  Fifa World Cup Schedule, Stats and Live Cricket Score. Like us on Facebook or follow us on Twitter for more sports updates. You can also download the NDTV Cricket app for Android or iOS.