Gianluigi Buffon was substituted in the 63rd minute to take an ovation before 40,000 emotional Juventus fans many with their eyes brimming with tears. 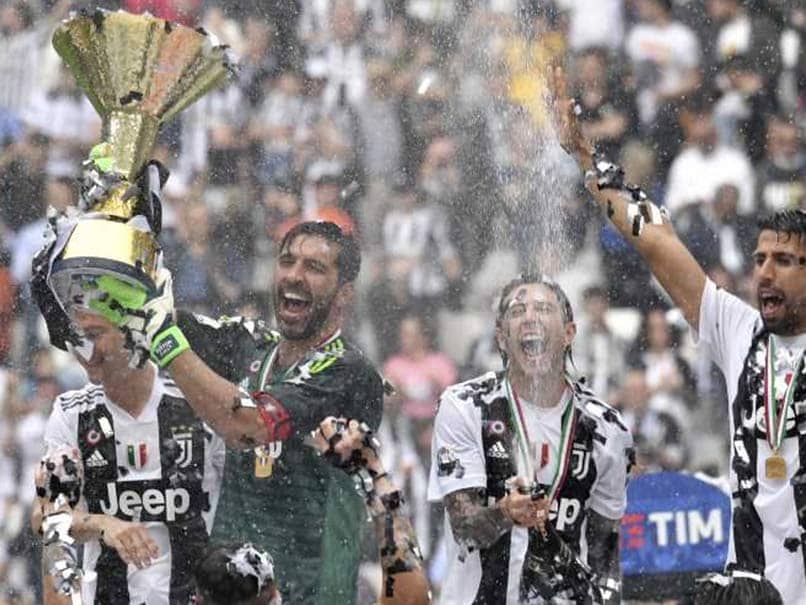 Gianluigi Buffon has yet to decide what the future holds and has said he could take a 6-month sabbatical.© AFP

Italy great Gianluigi Buffon played his final game for Juventus on Saturday before tearfully exiting after a trophy-laden 17-year career in a 2-1 win over already relegated Verona. Buffon -- who had captained Juventus to a seventh straight Serie A title and fourth consecutive Italian Cup triumph this season -- took his final bow midway through the second half. It was the 656th game for the evergreen 40-year-old who arrived in Turin in 2001 from Parma for a then world record 52 million euros fee. The goalkeeper and captain was substituted by coach Massimiliano Allegri after 63 minutes to take an ovation before 40,000 emotional Juventus fans many with their eyes brimming with tears.

Juventus were two goals up thanks to Daniele Rugani after 49 minutes and Miralem Pjanic three minutes later when Buffon came off the pitch.

He hugged all his teammates, on the field and on the bench, and then left the sidelines.

Goalkeeper Carlo Pinsoglio made his Serie A debut between the posts but Alessio Cerci pulled one back for the visitors on 76 minutes, ending Juventus's bid for a record 23 games in one season without conceding a goal.

Buffon had said he did not want anything special for his final game.

"I want to live this day normally. I ask nothing except what I have already had, esteem, affection and respect. The rest I do not need it. As a child, I did not like birthdays and be in the centre of attention," Buffon had said.

But there was thundering applause and singing as the goalkeeper and Juventus captain emerged from the locker rooms.

He was accompanied onto the pitch at the Allianz Stadium by his three children - the youngest, Leopoldo, in the arms of his partner Ilaria D'Amico, and the other two, Louis Thomas and David Lee, led by the hand of his ex-wife Alena Seredova.

In the south tribune Juventus fans unfurled a banner with a phrase: "Only those who try the absurd reach the impossible".

And a large part of the tribune was covered for a few minutes with a giant flag with the image of the goalkeeper. There were messages "17 years with you. Thanks Gigi", "Gigi Buffon, immortal hero" and "Gigi, Santo Subito".

Buffon hugged each of his teammates including his successor Polish keeper Wojciech Szczesny and new captain Giorgio Chiellini and took his place in between the post for his final game.

The crowd cheered his every move with his first save after quarter of an hour against Mohamed Fares.

The moment everyone was waiting for came at after 63 minutes.

Buffon hugged every teammate, every member of staff, waved at the crowd until he got to the bench, rested his head back and sighed with eyes close.

Called loudly by the public, Buffon, after a brief stop in the locker room, returned, with the game still in progress, and started the round of the field to shake hands, under the driving rain and thunder.

Buffon has yet to decide what the future holds and has said he could take a six-month sabbatical.

He has received an offer to stay on at Juventus in a management role with reported offers to play with clubs such as Paris Saint-Germain.

Comments
Topics mentioned in this article
Juventus Gianluigi Buffon Football
Get the latest updates on IPL 2021, check out the IPL 2021 Schedule and Indian Premier League Live Score . Like us on Facebook or follow us on Twitter for more sports updates. You can also download the NDTV Cricket app for Android or iOS.