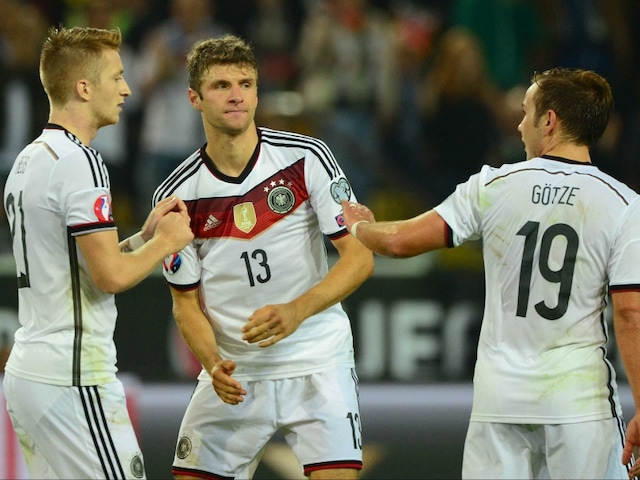 World champions Germany got their Euro 2016 qualifying campaign off to a shaky start with a nervy 2-1 win over Scotland in Dortmund on Sunday.

Germany lost 4-2 against Argentina in a friendly on Wednesday but a goal in each half from Bayern Munich attacker Thomas Mueller ensured they won their first competitive fixture since the World Cup.

Scotland delivered a spirited performance though and they were rewarded for a positive second-half approach when winger Ikechi Anya raced clear to equalise on 66 minutes.

But the visitors failed to clear a corner four minutes later and Mueller capitalised to thump home his 24th international goal.

Mueller's winner denied Gordon Strachan's side what would have been a precious point in a group that also includes the Republic of Ireland, Poland, Georgia and Gibraltar.

"At 1-1, I genuinely believe we can win the game at that point," Strachan said.

"I've seen players at that point playing with no fear of the game.

"The longer the game we went on, the more of a threat we got. We really should be proud. All we have to do is work on the first 20 minutes. Get that sorted out and we'll be fine. We'll be good."

In midfield, Germany were missing new captain Bastian Schweinsteiger, Real Madrid's Sami Khedira and Arsenal's Mesut Ozil, while at the back Jerome Boateng returned in defence.

With Philipp Lahm having retired after the World Cup, Hoffenheim's Sebastian Rudy surprisingly earned his third cap at right-back.

Scotland were captained by Manchester United midfielder Darren Fletcher and the visitors also included in-form Everton striker Steven Naismith as they sought to beat Germany in a competitive fixture for the first time.

There looked little danger of that in the opening stages.

On eight minutes a Toni Kroos cross found Mueller unmarked but the 25-year-old badly miscued his header from eight yards out.

The Scots then created a decent opening when Ikechi Anya turned Boateng and Barry Bannan saw his shot deflected wide and Celtic's Charlie Mulgrew soon cracked a volley against the woodwork -albeit from an offside position.

Rudy lofted a ball into the box and it was third time lucky for Mueller in the air as he climbed above Russell Martin to cleverly steer a header over Marshall.

Reus then forced another save from Marshall as Germany dominated possession in a busy opening period for the Cardiff City keeper.

Only 1-0 down the break and playing into the vocal visiting fans end in the second half, Scotland still had plenty of hope.

And there was a real warning for Germany three minutes after the restart when Naismith skipped past two players inside the box only to see his shot shave the post.

Schuerlle blazed off target at the other end but approaching the hour Naismith failed to make the most of another good chance for the visitors. Anya delivered a good cross from the left but Naismith blasted well wide on his left foot.

Substitute Steven Fletcher then had a header blocked by Rudy but soon afterwards the visiting fans went wild as Anya equalised.

World Cup final goalscorer Mario Goetze lost possession in the Scots' half and with the German defence pushed up, a simple pass from Fletcher sent the Watford player bearing down on goal. Anya kept his cool and slotted beyond Neuer.

The Scots' joy was shortlived, however. Substitute James McArthur was unable to get the ball clear from a corner and Mueller slammed home from close-ranger.

Scotland were unable to fashion a second equaliser and the night ended on a miserable note when Mulgrew was sent off for dissent in stoppage time.

Mueller was then denied a hat-trick when he hit the post.

Comments
Topics mentioned in this article
Thomas Muller Germany Scotland Football
Get the latest Cricket news, check out the India cricket schedule, Cricket live score . Like us on Facebook or follow us on Twitter for more sports updates. You can also download the NDTV Cricket app for Android or iOS.