Schwarzer has been in fine form for the Premier League side this season and Jol is keen to extend the 40-year-old's stay at Craven Cottage. 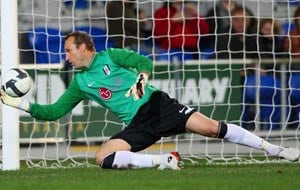 Fulham manager Martin Jol revealed on Friday that his club are in talks with Australia goalkeeper Mark Schwarzer over a new contract.

Schwarzer has been in fine form for the Premier League side this season and Jol is keen to extend the 40-year-old's stay at Craven Cottage.

Fulham captain Brede Hangeland last week became the latest veteran after Damien Duff and Philippe Senderos to sign a new contract with the Cottagers and Jol confirmed Schwarzer had been offered a new deal.

"We are talking to Mark Schwarzer like we did with Brede and the other players," Jol said on Friday.

"He is a fantastic goalkeeper so you would have to be very good to fill that space.

"We have made him an offer so we are waiting. If he accepts he will stay, if not we will talk again like we did with Brede."

Although Schwarzer continues to play like a much younger man, Jol concedes he needs to look at another goalkeeper as David Stockdale and Neil Etheridge are not content to remain as back-up to the former Middlesbrough star next season.

"I don't deny that we are looking for a goalkeeper," Jol added.

"There is a lot of speculation in the press. I have a young goalkeeper in Neil Etheridge, he is out on loan and so is David Stockdale.

"He doesn't want to be number two so that could be a little problem, so of course we are always looking for a goalkeeper."

"We are not talking with Mihaylov. Last year we made an approach, but not this year," he said.

Comments
Topics mentioned in this article
Football Bayern Munchen Liverpool Arsenal Fulham Clint Dempsey Dimitar Berbatov Mark Schwarzer Craven Cottage
Get the latest updates on IPL 2020, check out the IPL Schedule for 2020 and Indian Premier League (IPL) Cricket live score . Like us on Facebook or follow us on Twitter for more sports updates. You can also download the NDTV Cricket app for Android or iOS.