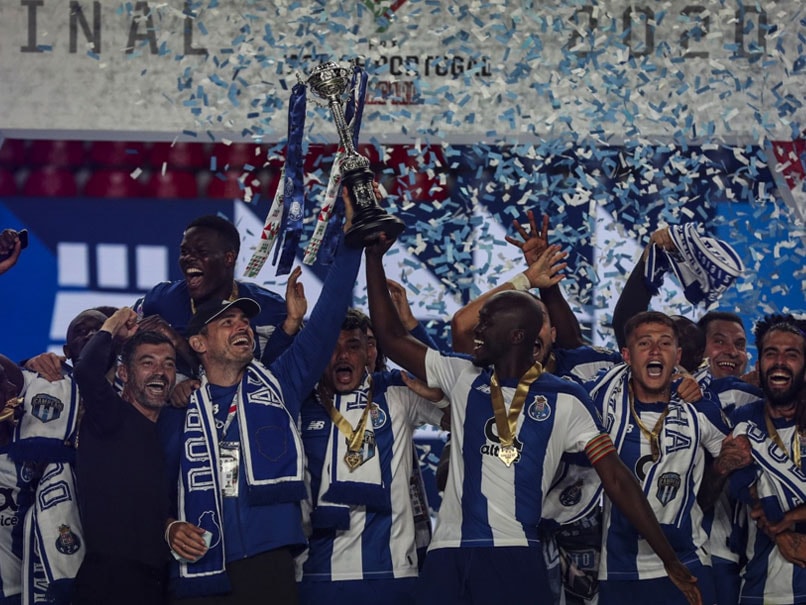 Victory allowed FC Porto to complete a league-cup double for the first time since 2011.© AFP

Democratic Republic of Congo international Chancel Mbemba scored twice as FC Portodefeated old rivals Benfica 2-1 on Saturday to win the Portuguese Cup for the 17th time. Mbemba, a 25-year-old defender, scored both his goals in the second half of the final played behind closed doors in Coimbra. Victory allowed Porto to complete a league-cup double but they did it the hard way.

Mbemba headed in the opener from a free-kick two minutes into the second period and repeated the trick from another set piece on the hour mark.

Benfica cut the deficit in the 84th minute from the penalty spot with Brazilian Carlos Vinicius tucking the ball away.

Benfica's Jota then saw a shot come back off the post in the last minute.

The domestic final was originally scheduled to be played on May 24 but was postponed due to the coronavirus crisis.

It was also moved from Lisbon to Coimbra and played behind closed doors, as has been commonplace in Europe during the pandemic.

Porto and Benficafinished first and second in the league and were comfortably the best two teams in the league, with the Lisbon side recording just two fewer wins than their northern rivals.

The match was Benfica caretaker manager Nelson Verissimo's last game in charge before Jorge Jesus takes over for next season.

Jesus, 65, is arriving for a second spell at Benfica, who he managed for six years between 2009 and 2015, winning three league titles.

Benfica Chancel Mbemba Football
Get the latest updates on T20 World Cup, check out the T20 World Cup Schedule and Live Score . Like us on Facebook or follow us on Twitter for more sports updates. You can also download the NDTV Cricket app for Android or iOS.