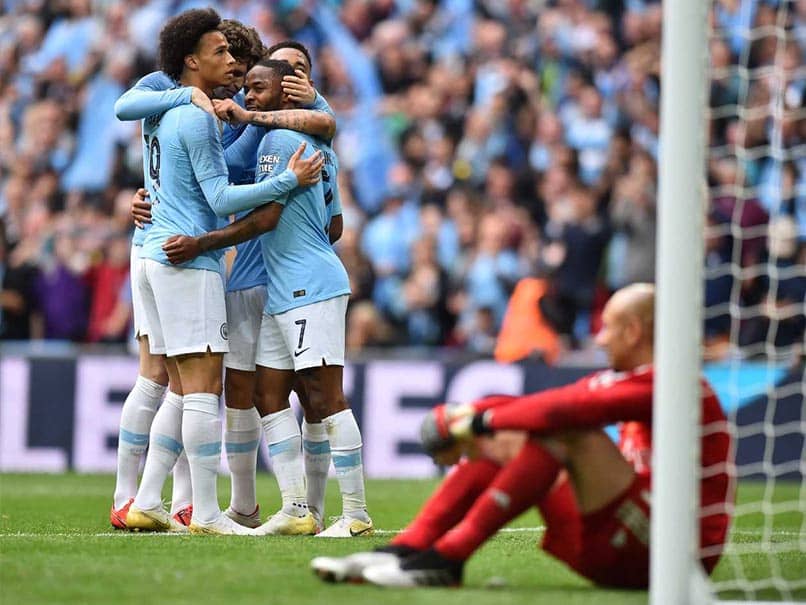 Manchester City completed the first ever domestic treble in English football in emphatic fashion by dispatching Watford 6-0 at Wembley to claim the FA Cup on Saturday. Raheem Sterling scored a hat-trick, while David Silva, Kevin de Bruyne and Gabriel Jesus also netted to cap a glorious campaign with the biggest margin of victory in a FA Cup final since 1903. Watford's wait to win their first ever major piece of silverware goes on, but after going behind they had little answer to Pep Guardiola's relentless champions as the Catalan picked up the 27h trophy of his coaching career. It could have been very different for the Hornets had Roberto Pereyra not missed the first big chance of the game after Watford pounced on one slack pass by Oleksandr Zinchenko to spring a counter-attack.

Gerard Deulofeu fed the Argentine, but City goalkeeper Ederson raced from his goal to make a fine save with his trailing leg.

Watford were also left angered as a handball shout for a penalty against Vincent Kompany was not looked upon favourably by referee Kevin Friend or the Video Assistant Referee.

And Javi Gracia's men also played a big part in their own downfall for City's first goal on 26 minutes from which Guardiola's men never looked back.

The diminutive figures of David Silva and Sterling both won headers against taller defenders before the ball broke for the Spaniard to fire across Heurelho Gomes.

City control then turned into total dominance as a gloriously crafted second gave Watford a mountain to climb.

Bernardo Silva's curling cross picked out Jesus at the back post and the Brazilian's effort was heading in before Sterling snatched his 24th goal of the season by smashing the ball over the line.

Veteran goalkeeper Gomes was making what is expected to be his final game before he plans to become a pastor in retirement.

Watford were left praying for a miracle that never came, but the 38-year-old briefly kept his side in the game either side of half-time with saves from Riyad Mahrez and Jesus.

Deulofeu had been Watford's star of a remarkable semi-final comeback from 2-0 down against Wolves and had the chance to spark the game back into life just before the hour mark, but scuffed his shot wide.

City's strength in depth was in evidence as Guardiola could afford the luxury of leaving Sergio Aguero on the bench for Jesus, as a reward for the Brazilian who started every FA Cup game this season, and introduce De Bruyne 10 minutes into the second half.

Jesus' unselfishness allowed the Belgian to end an injury-ravaged season on a high by rounding Gomes to fire City's third into an empty net.

And the roles were reversed for City to rub more salt into Watford wounds 22 minutes from time when De Bruyne's pass released Jesus in behind to get the goal his performance deserved.

Sterling then added another landmark in the final 10 minutes by becoming the first player since 1953 to score a FA Cup final hat-trick as he converted Bernardo Silva's low cross and then fired home at the second attempt three minutes from time.

City have now won all 11 meetings between these two sides since the club's Abu Dhabi takeover a decade ago.

Questions will continue to be asked of the legitimacy of how City amassed such a great side with UEFA, FIFA and FA investigations pending into City's conduct off the field.

But on it they cannot be questioned as one of the greatest England has ever produced and have the medals to prove it.

Manchester City Raheem Sterling Football
Get the latest updates on India vs England Series, India vs England , live score and IPL 2021 Auction . Like us on Facebook or follow us on Twitter for more sports updates. You can also download the NDTV Cricket app for Android or iOS.