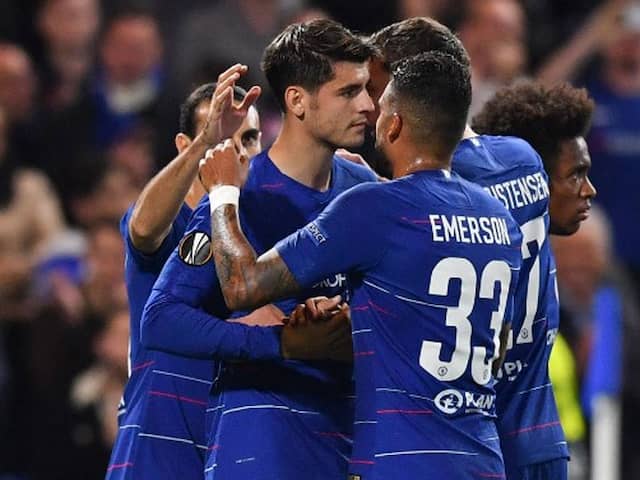 Alvaro Morata scored for just the second time in 10 outings this season.© AFP

An emotional Alvaro Morata snapped his recent goal drought to secure a 1-0 win for Chelsea over Hungarian champions Vidi in the Europa League on Thursday, as Arsenal cruised to a 3-0 victory away to Qarabag in Azerbaijan. Spain striker Morata, without a goal since August 18, wasted a terrific chance in the first half at Stamford Bridge but atoned with a sharp finish on 70 minutes to put Chelsea ahead. Substitute Ross Barkley also headed against the crossbar, while Kepa Arrizabalaga -- the world's most expensive goalkeeper -- produced an excellent save to deny Istvan Kovacs a late equaliser.

"If after a goal he wants to cry, I hope to see him cry very often," Chelsea coach Maurizio Sarri said of Morata, who scored for just the second time in 10 outings this season.

Chelsea head Group L with a maximum six points with PAOK -- 4-1 winners over BATE Borisov -- level on three points alongside the Belarusian champions.

The Gunners extended their winning run to eight matches and lead Sporting Lisbon on goal difference at the top of Group E, after the Portuguese side snatched a 2-1 win in Ukraine with two late goals against Vorskla Poltava.

"It was a difficult game. Every match is important for us. We played an away game against a strong opponent," said Arsenal boss Unai Emery.

"Qarabag is an ambitious team and we had to try a lot today. However, in the end, the desired result was achieved."

Arsenal's Armenian midfielder Henrikh Mkhitaryan did not make the trip to Azerbaijan due to diplomatic tensions between the country and his homeland.

Celtic slumped to a 3-1 defeat against Red Bull Salzburg despite taking the lead in Austria.

Odsonne Edouard struck after just two minutes, but a brace from Munas Dabbur and a goal from Japanese forward Takumi Minamino gave Salzburg a second win in two Group B matches.

Celtic lost James Forrest to a straight red card after he upended Andreas Ulmer in the area, with Dabbur converting the resulting penalty to condemn Brendan Rodgers' side.

Seven-time European champions AC Milan recovered from a goal down at home to Olympiakos to claim a 3-1 victory in Group F, as Patrick Cutrone scored twice either side of a Gonzalo Higuain effort.

Steven Gerrard's Rangers overcame Rapid Vienna 3-1 at Ibrox as Alfredo Morelos netted twice and James Tavernier scored from the spot after the hosts fell behind to a Veton Berisha effort.

"I have been blown away by my players' performance," Gerrard told BT Sport.

"The level was well deserving of the Europa League, and if we perform like that in our next two home games we'll get out of this group. That's the best we've played."

Last year's runners-up Marseille threw away a two-goal lead in Cyprus and were forced to settle for a 2-2 draw against Apollon Limassol.

Goals by Dimitri Payet and Luiz Gustavo put the French club in control, but Sasa Markovic pulled one back before Emilio Zelaya fired home in stoppage time.

Santi Cazorla scored his first goal in over two years as he tucked away a 96th-minute penalty to snatch a 3-3 draw for Villarreal away to Spartak Moscow.

The 77-times capped Spanish international, who is now 33, suffered a serious Achilles injury playing for Arsenal in the Champions League in October 2016.

After eight operations, the little attacking midfielder suffered a serious infection in the tendon that almost led to an amputation.

But he fought back and recently returned to Villarreal, seven years after his departure for Malaga.

FK Qarabag Álvaro Morata Football
Get the latest Cricket news, check out the India cricket schedule, Cricket live score . Like us on Facebook or follow us on Twitter for more sports updates. You can also download the NDTV Cricket app for Android or iOS.