Arsenal registered a 5-1 aggregate win over AC Milan in the Europa League last 16 to reach their first European quarter-final since 2010. 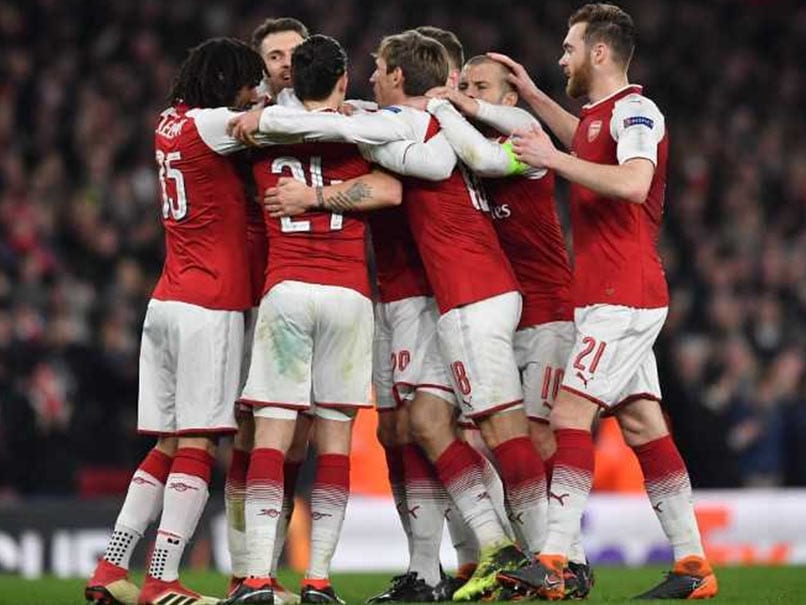 Danny Welbeck's controversial penalty and a Gianluigi Donnarumma howler helped Arsenal beat AC Milan in the Europa League last 16 on Thursday 5-1 on aggregate, while Borussia Dortmund slumped to a shock exit at the hands of Salzburg. The 3-1 win on the night eases some of the pressure on Arsenal manager Arsene Wenger, although his team's 2-0 first-leg lead looked precarious when Hakan Calhanoglu fired Milan ahead. But Gennaro Gattuso's visitors were left incensed when Welbeck tumbled to the floor under little to no contact from Ricardo Rodriguez, with the spot-kick apparently given by the official on the byline.

The forward picked himself up to send Donnarumma the wrong way, and leave the infuriated Milan players demonstrating with the officials.

"When I watch the penalty, I will give you an honest answer (whether Welbeck dived)," Wenger told BT Sport.

"It was good to see a response from the team at 0-1 down. I don't want to accuse Danny Welbeck of diving before I see it again."

Seven-time European champions Milan piled on the pressure in the second half, only for their hopes to be ended when Donnarumma allowed Granit Xhaka's speculative 71st-minute strike to slip through his grasp and bobble into the net.

Welbeck nodded in his second late on as Arsenal reached their first European quarter-final since 2010, after seven consecutive Champions League last-16 defeats.

Borussia Dortmund bowed out of the tournament, though, with a tame goalless draw in Austria sealing their fate.

After falling to a shock 2-1 loss in the first leg at home, the German giants failed to break down their stubborn opponents, who will play in the last eight of a continental competition for the first time since losing the 1994 UEFA Cup final to Inter Milan.

CSKA Moscow stunned last season's semi-finalists Lyon, with a 3-2 victory in France ending the Ligue 1 club's hopes of reaching May's final at their own Groupama Stadium.

The Russian away side wiped out Lyon's first-leg one-goal lead before half-time through Aleksandr Golovin, although Maxwel Cornet equalised for Bruno Genesio's hosts.

But two goals in five minutes swung the tie in CSKA's favour, as Ahmed Musa struck on the hour mark and Pontus Wernbloom made it 3-2 on aggregate.

Mariano Diaz gave Lyon hope, but CSKA held on to progress on away goals.

Earlier on Thursday, Fernando Torres scored twice as Atletico Madrid romped to a 5-1 Europa League thrashing of Lokomotiv Moscow in Russia to complete a resounding victory.

Diego Simeone's side wrapped up an 8-1 win on aggregate to book a place in Friday's quarter-final draw.

Elsewhere, Marseille continued their excellent run with a comfortable 5-2 aggregate victory over Athletic Bilbao to reach a European quarter-final for the first time since the 2011-12 Champions League.

"We have to admit that Marseille were superior in both matches," said Bilbao coach Jose Angel Ziganda.

"We weren't able to put doubts in their minds, which is what we wanted to do."

But the match was marred as visiting fans attacked and injured two security guards in the city, just three weeks after an officer died during an unrelated bout of fan violence before Bilbao's tie with Spartak Moscow.

A spokesman for the Ertzaintza, the Basque Country's regional police, said a guard was injured in the neck with "a sharp object".

Lazio joined Rudi Garcia's Marseille in the last eight after a 2-0 win at Dynamo Kiev brushed off the disappointment of last week's home draw.

RB Leipzig edged into the quarter-finals as they continued their debut European season with a 3-2 aggregate win over Zenit St Petersburg, despite out-of-form Germany striker Timo Werner missing a late penalty in Russia.

Rodrigo Battaglia sent Sporting Lisbon into the quarters for the first time in six years as the Argentinian struck in extra time to see off a spirited Viktoria Plzen in the Czech Republic.

Comments
Topics mentioned in this article
AC Milan Arsenal Borussia Dortmund Marseille Danny Welbeck Football
Get the latest updates on ICC T20 Worldcup 2022 and CWG 2022 check out the Schedule, Live Score and Medals Tally. Like us on Facebook or follow us on Twitter for more sports updates. You can also download the NDTV Cricket app for Android or iOS.