Arsenal quickly ended any doubt over the contest on the field as Aaron Ramsey and Alexandre Lacazette both scored twice in the first half to surely put the tie out of CKSA's reach. 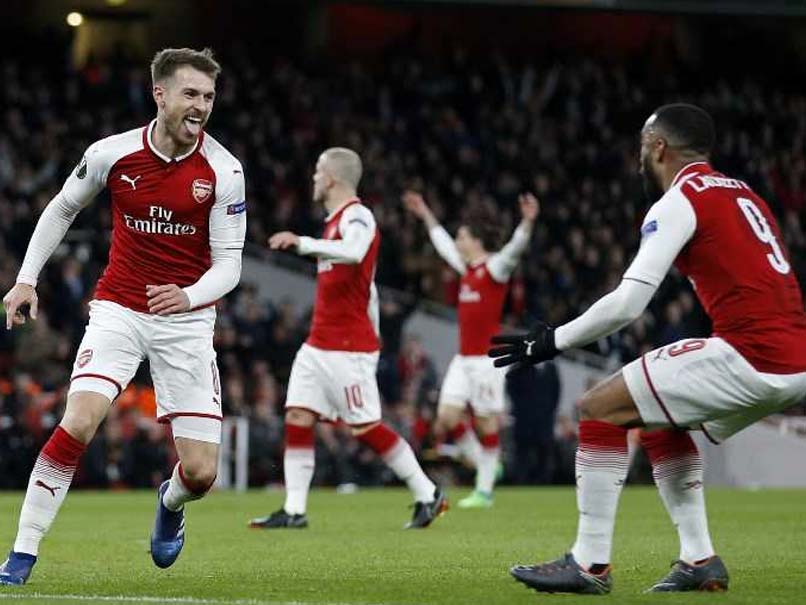 Arsenal romped towards the Europa League semi-finals with a 4-1 thrashing of CSKA Moscow on Thursday in a match devoid of any of the political tension that threatened to overshadow the tie due to frosty relations between London and the Russian capital. Britain has suspended high-level diplomatic contact with the Russian government after former Russian spy Sergei Skripal and his daughter Yulia were poisoned with a nerve agent in the southern English city of Salisbury last month. However, with only around 200 CSKA fans making the long journey west, there was little bad blood inside the ground for the quarter-final first leg.

And Arsenal quickly ended any doubt over the contest on the field as Aaron Ramsey and Alexandre Lacazette both scored twice in the first half to surely put the tie out of CKSA's reach.

"It was a spectacular first half played at a high pace, but as well an uncomfortable one for me because they looked dangerous," said Arsenal boss Arsene Wenger.

"By half-time we scored so many great goals in the first half, at 4-1 the target was not to concede anymore and maybe score one more.

"We did the first part of the job but not the second part. But it will help us to focus completely in the second game and not go there thinking it is job done."

It remains to be seen if a more hostile atmosphere awaits Arsenal fans and players in the Russian capital next week.

However, CSKA coach Viktor Goncharenko encouraged the Gunners' support and England fans travelling for the World Cup in June to visit Russia.

"We still welcome you in Moscow," said Goncharenko. "We can assure you there will be great stadiums and great football. Please come to Russia."

Languishing in sixth in the Premier League, 13 points adrift of the top four, Arsenal's last realistic hope of qualifying for next season's Champions League is by winning the Europa League in Lyon on May 16.

And that desperation showed in a thrilling four-goal first 45 minutes.

Ramsey opened the scoring by rounding off a fine team move on nine minutes by firing Hector Bellerin's cross into the roof of the net.

While CSKA were unable to cope with Arsenal's speed of thought and movement at the back, they exposed the Gunners' own defensive weaknesses.

Arsenal got the slice of fortune they needed when Mesut Ozil was controversially awarded a penalty as he fell under Georgi Schennikov's challenge.

Lacazette has endured a frustrating debut season at the Emirates, but made the most of the cup-tied Pierre-Emerick Aubameyang's absence by confidently slamming home from the spot.

Ramsey then doubled his tally for the evening in style with an audacious flick over Igor Akinfeev with the outside of his foot to give Arsenal some breathing space from a teasing Ozil cross.

Ozil was again the creator when Lacazette also grabbed a double by shooting into the far corner for his first goal from open play in nearly three months.

Arsenal are likely to have to beat the might of Atletico Madrid to end their season on a high, though, as the favourites for the competition eased past Sporting Lisbon 2-0 in the first leg of their quarter-final.

Koke put the 2012 winners ahead in the Spanish capital after just 22 seconds and Antoine Griezmann's 24th goal of the season put Diego Simeone's men on the brink of a fifth European semi-final in his seven seasons in charge.

Elsewhere, Lazio edged a six-goal thriller 4-2 against Salzburg as all four home sides took an advantage into the second leg.

RB Leipzig lead French giants Marseille 1-0 as German international striker Timo Werner got the only goal for the Bundesliga side.

Comments
Topics mentioned in this article
Arsenal CSKA Moscow Aaron Ramsey Alexandre Lacazette Football
Get the latest updates on IPL 2020, check out the IPL Schedule for 2020 and Indian Premier League (IPL) Cricket live score . Like us on Facebook or follow us on Twitter for more sports updates. You can also download the NDTV Cricket app for Android or iOS.