Thomas Mueller gave the hosts an early lead in Frankfurt on Friday and Goetze scored twice as Germany avenged last year's 2-0 away defeat in Warsaw to replace Poland at the top of Group D. 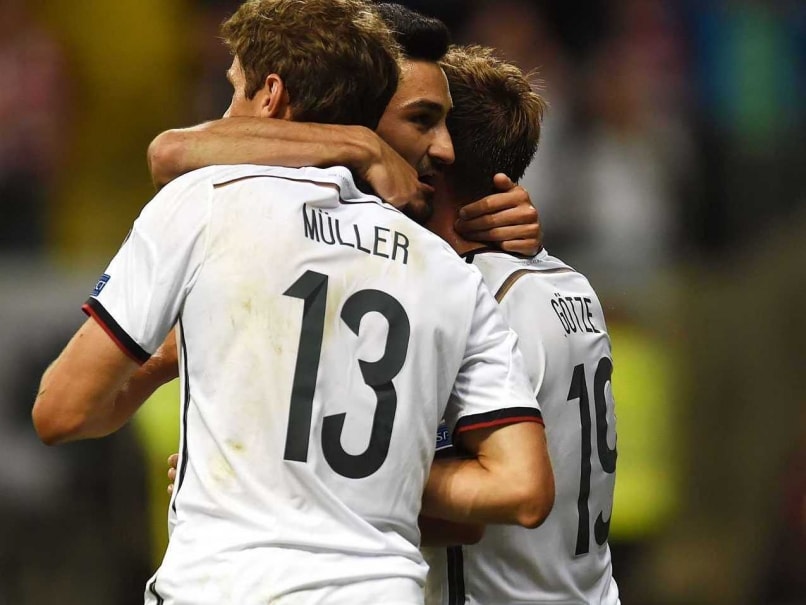 Germany celebrate after their win vs Poland in the Euro 2016 Qualifiers.© AFP
Berlin:

Joachim Loew says Germany can improve further in Monday's Euro 2016 qualifier away to Scotland after Mario Goetze's goals sealed a 3-1 win over Poland to top their group.

Thomas Mueller gave the hosts an early lead in Frankfurt on Friday and Goetze scored twice as Germany avenged last year's 2-0 away defeat in Warsaw to replace Poland at the top of Group D.

All four goals came from Bayern Munich players as Poland captain Robert Lewandowski pulled one back with a diving header as it finished 2-1 at the break.

Mueller and Goetze then combined for Germany's third on 82 minutes to kill off hopes of a late Poland equaliser.

"We had one goal, to win the game, that was the most important thing," said Germany head coach Loew after arguably his side's best display since winning the 2014 World Cup.

"All in all, we can be very happy, the team were very focused over long stretches, but the chances Poland had come from our mistakes.

"It will be a different type of game against Scotland, much tighter and we have areas to improve."

It was Poland's first defeat in seven Euro 2016 qualifiers in an impressive display from the Germans after several below-par performances last season.

Scotland's 1-0 defeat away to Georgia saw them drop to fourth in the table with Germany top on 16 points, Poland now second on 14 while Ireland go third with 12, one ahead of the Scots.

But Toni Kroos echoed Loew's sentiments ahead of Germany's next qualifier at Glasgow's Hampden Park.

"It was a deserved win, but on occasion we invited Poland to attack us, which we have to improve," said the Real Madrid midfielder.

"All in all, it was a good win, but Scotland could be an unpleasant opponent to face (after their defeat) and we're been warned."

But the Germans were just relieved to finally top the group.

"We really wanted the three points to take first place," said Goetze, who also cleared a first-half Lewandowski header off the line and hit the post.

"I was in the right place at the right time for the header off the line.

"Things certainly could have gone a lot worse tonight, for me included."

Loew sprang a surprise before kick-off by naming Liverpool midfielder Emre Can, 21, at right-back, but the experiment was only a partial success and the debutant was caught out for Poland's goal.

The Germans were also guilty of several stray passes in midfield.

"We're certainly relieved that we won, but I would have liked to see that we are a little more stable and not play so many bad passes," said goal-scorer Mueller.

"Overall, we are satisfied, we've beaten the strongest opponents in the group. Now we're group leaders, which was where we wanted to be."

Comments
Topics mentioned in this article
Germany Scotland Football
Get the latest updates on India vs England Series, India vs England , live score and IPL 2021 Auction . Like us on Facebook or follow us on Twitter for more sports updates. You can also download the NDTV Cricket app for Android or iOS.