The 34-year-old centre-half won 81 caps in an international career that took him to three World Cups. 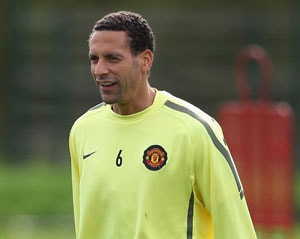 Rio Ferdinand announced Wednesday that he was calling time on his England career to concentrate on his club duties at Manchester United.

The 34-year-old centre-half won 81 caps in an international career that took him to three World Cups.

"After a great deal of thought, I have decided the time is right for me to retire from international football," he said in a statement.

"At the age of 34, I feel it is right for me to stand aside and let the younger players come through, which allows me to concentrate on my club career.

"The team looks in great shape and there is an influx of young, talented players coming through the ranks which bodes well for the future."

The south Londoner has not played for England since featuring against Switzerland in June 2011.

He became England's youngest-ever defender when he made his debut shortly after his 19th birthday in a friendly against Cameroon at Wembley in November 1997.

England manager Roy Hodgson said: "It is important to pay tribute to someone of Rio's stature and the achievements he had in a senior international career with England over 14 years at the highest level.

"To have captained his country, to play at three World Cups and indeed score in one of those, marks him out amongst a very special group of players."

Comments
Topics mentioned in this article
Football Arsenal Chelsea Manchester United Rio Ferdinand Wayne Rooney Alex Ferguson
Get the latest updates on ICC T20 Worldcup 2022 and CWG 2022 check out the Schedule, Live Score and Medals Tally. Like us on Facebook or follow us on Twitter for more sports updates. You can also download the NDTV Cricket app for Android or iOS.