Eden Hazard's comeback also coincided with Real Madrid conceding twice in a league game for the first time since October, even if they did let in three in the Copa del Rey against Real Sociedad two weeks ago. 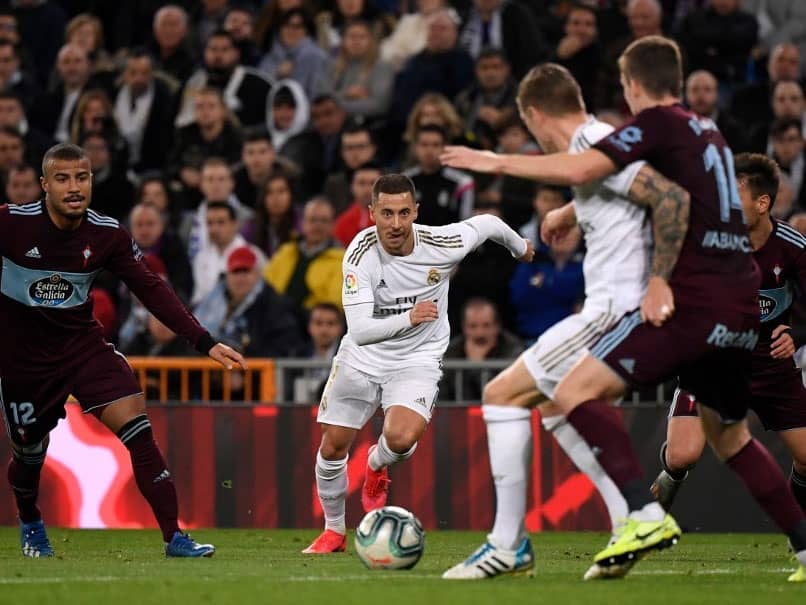 Eden Hazard's return should prove timely ahead of a crucial week for Real Madrid, but fitting him into the team may not be a simple task for Zinedine Zidane. Real Madrid play at Levante on Saturday at the start of an eight-day period that continues at home to Manchester City in the Champions League and finishes against Barcelona at the Santiago Bernabeu. Eden Hazard made his first appearance since November 27 versus Celta Vigo last weekend and impressed, winning a penalty in the second half and offering hope he can regain sharpness quicker than when he returned from injury in September.

"We're happy to have him back for what did during his 70 minutes -- we know what he can give us," said Zidane. "He played longer than expected because after three months out, we didn't want to go overboard.

"He brought a lot of attacking intent, especially for the second goal, so we're delighted to have him with us again."

But Hazard's comeback also coincided with Madrid conceding twice in a league game for the first time since October, even if they did let in three in the Copa del Rey against Real Sociedad two weeks ago.

While he was out, the hope was Hazard would add some attacking flair to Madrid's steely defence but there are concerns their tightness could be compromised by his inclusion.

Madrid have surged to the top of La Liga due to a 15-match unbeaten run founded on seven goals conceded, rather than an abundance of creativity up front.

Hazard is an automatic pick and it is no coincidence his return to the side comes just before the last-16 first leg against City and then the Clasico.

Yet Zidane will have to find a balance. He appeared to settle on Hazard's best position being in a front two behind Karim Benzema in October but Madrid's success in the Belgian's absence has been in a 4-3-3 or 4-5-1 formation.

"We've played with three up front all our lives, it doesn't weaken us," said Zidane on Saturday.

In that system, Hazard could be played off the left, where he thrived for Chelsea. Zidane even tried a back three in pre-season but with little success.

Zidane's plans for City and Barca will be particularly interesting given he has previously viewed Gareth Bale as too much of a liability defensively against elite opponents.

Barcelona will warm up for the Clasico at home to Eibar on Saturday before facing a trip to Napoli in the Champions League three days later.

Despite a turbulent few weeks on and off the pitch, Quique Setien's team have managed to restrict Madrid's lead at the top to just one point and have three consecutive victories in the league.

One to watch: Diego Costa

Costa came off the bench in Atletico's win over Liverpool on Tuesday to make his first appearance since November 10.

His recovery from a back problem is a welcome boost for Atletico, who can now reunite him with Alvaro Morata, with the Spaniard also fit again after injury.

Costa was hardly in scintillating form in the first half of the season, when he managed only two goals in 16 games.

But time away could revitalise the striker, whose defensive work has always been highly valued by Diego Simeone.

Atletico play at home to Villarreal on Sunday, when they will aim to consolidate their place in the top four, before Getafe and Sevilla play each other in Madrid on Sunday.

Barcelona Eden Hazard Football
Get the latest updates on IPL 2021, IPL Points Table , IPL Schedule 2021 , live score . Like us on Facebook or follow us on Twitter for more sports updates. You can also download the NDTV Cricket app for Android or iOS.