Lewandowski, 24, has scored 14 goals in 20 league games this season, while his 30-goal haul last season was a major factor in Borussia winning the league and cup double and he is contracted until June 2014. 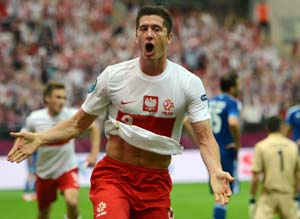 "We have tried everything and even made an exceptional offer by our standards. But when it is not accepted, you develop a feeling for these things and I don't currently believe it will be," Watzke told German television Liga Total!

Dortmund coach Jurgen Klopp also admitted Lewandowski will not be easy to replace.

"If he goes, which is not yet certain, I think we are well prepared for it," he told German broadcaster ZDF.

"But a guy like Lewandowski is not easy to replace, otherwise not so many clubs would be taking such a huge interest in him."

Lewandowski, 24, has scored 14 goals in 20 league games this season, while his 30-goal haul last season was a major factor in Borussia winning the league and cup double and he is contracted until June 2014.

It looks increasingly likely he will join Bundesliga leaders Bayern, amidst growing reports of that nature.

"Scenario One: Bayern Munich has no interest in Robert - then this is all rubbish," Watzke told German Sky after their 3-0 win over Eintracht Frankfurt.

"Scenario Two: They are interested, then they will eventually have to show their cards, come to us and ask a question.

"If they do, they will get an answer, which will surprise them, maybe."

After Friday's 2-0 win over Wolfsburg kept them 15 points clear of second-placed Dortmund in the Bundesliga, Bayern's bosses were tight-lipped on the Lewandowski topic.

When asked if he could shed some light on the subject, he just replied drily: "That would take all the suspense out of it."

Comments
Topics mentioned in this article
Football Bayern Munchen Borussia Dortmund Mame Diouf Robert Lewandowski Shinji Okazaki
Get the latest updates on IPL Auction 2023 and check out  IPL 2023 and Live Cricket Score. Like us on Facebook or follow us on Twitter for more sports updates. You can also download the NDTV Cricket app for Android or iOS.