England manager Roy Hodgson has revealed Peter Crouch snubbed his request to put the Stoke striker on a standby list ahead of Euro 2012. 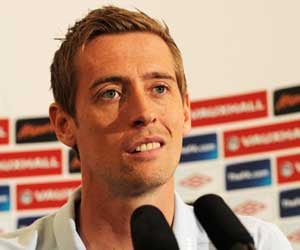 England manager Roy Hodgson has revealed Peter Crouch snubbed his request to put the Stoke striker on a standby list ahead of Euro 2012.

Hodgson wanted to have Crouch ready for a late call-up in case of injuries before the tournament, but the 31-year-old told him he was only willing to make himself available for international duty if he was definitely going to be selected.

Despite an impressive strike-rate of 22 goals in 42 matches, enough to make him the joint 16th highest scorer in England history, Crouch has never been a regular starter for his country and the former Liverpool star has grown fed up of travelling around the world only to end up on the bench.

In the past he has been left out in favour of the likes of Bobby Zamora, Carlton Cole and Dean Ashton, who all have less impressive international pedigree than Crouch.

But, with the Euro snub in mind, Hodgson has opted against involving Crouch in the World Cup qualifiers against Moldova and Ukraine, even though he has a lack of top-quality strikers after injuries to Wayne Rooney and Andy Carroll.

"I selected him for the Euros (standby list), but he didn't want to come," Hodgson said.

"He was on a standby list but he made it clear that, unless he was in the squad, he didn't want to be considered.

"As a result, we've selected squads since when I felt I didn't need him. I'm not going to bring him in to fill up the bench.

"The day Crouch gets into the England squad is when I think he should be in the original 23."