Cristiano Ronaldo hit the crossbar as Portugal and Spain played out a goalless draw in a compelling friendly in Lisbon on Wednesday. 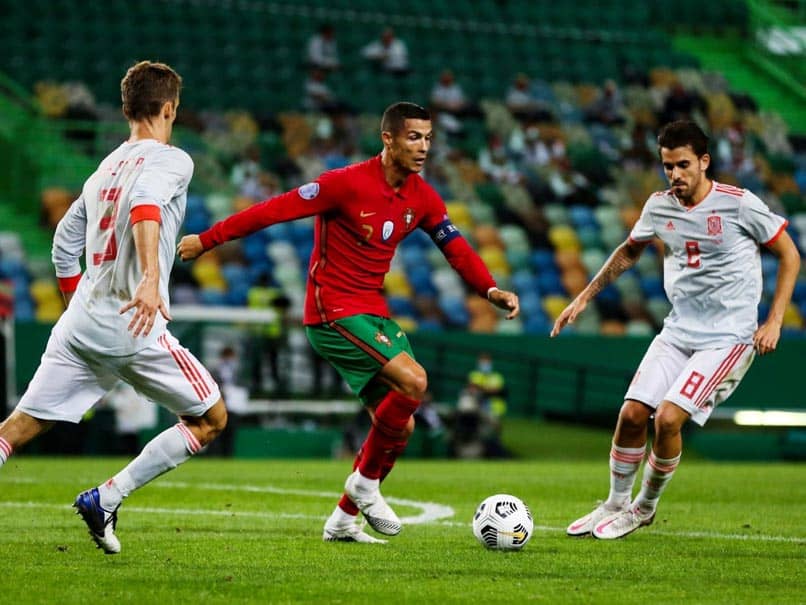 Cristiano Ronaldo and Renato Sanchez both struck the woodwork for Portugal against Spain on Wednesday.© AFP

Cristiano Ronaldo hit the crossbar as Portugal and Spain played out a goalless draw in a compelling friendly in Lisbon on Wednesday. Ronaldo and Renato Sanchez both struck the woodwork for Portugal, who then should have won it in injury-time only for Joao Felix to miskick at the back post. Spain were the better team early on at the Jose Alvalade stadium and also went close through Dani Olmo but neither side were able to claim victory ahead of upcoming games in the Nations League. "I think we were better than Portugal," said Spain coach Luis Enrique. "We dominated the game. For sure they had two shots on the break that hit the bar and one that Kepa saved but we had chances as well."

Both sit top of their Nations League groups, Portugal with maximum points after beating Croatia and Sweden while Spain have four after thrashing Ukraine and drawing with Germany.

Spain go up against Switzerland on Saturday before playing against Ukraine three days later. Portugal face world champions France on Sunday and then play at home to Sweden.

During the first half, it was also announced by the football federations of the two countries they will stage a joint bid to host the 2030 World Cup.

They will be competing against Morocco, as well as another joint bid from Uruguay, Argentina, Paraguay and Chile.

The last time Spain and Portugal met was for the thrilling 3-3 draw at the 2018 World Cup, when Ronaldo scored a hat-trick, including a stunning late equaliser from a free-kick.

This was a far less dramatic contest, with both teams still rebuilding ahead of next year's postponed European Championships.

It was the first time Spain had failed to score since losing to Italy at the 2016 European Championships in France.

For Portugal, the 20-year-old Francisco Trincao, who has just joined Barcelona, started in a front three with Ronaldo and Andre Silva.

Spain enjoyed a superb opening quarter of an hour but had nothing to show for it, as Gerard Moreno missed from close range and Olmo volleyed wide.

Portugal went closest in the second half. Ronaldo shifted onto his left foot and thundered a shot against the crossbar. He then turned provider, curving a pass right to Renato, whose effort also crashed against the frame and bounced out.

The best chance though fell to Felix in injury-time, the ball finding him free at the back post, only for the youngster to slide and somehow fail to connect.