Sunday's incident was just the latest in a series of flashpoints that have dogged Suarez since his arrival in English football, with the most high-profile being his ban for racially abusing Manchester United's Patrice Evra last season. 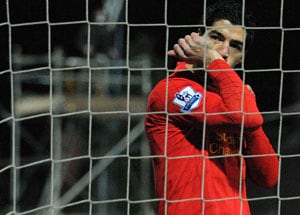 A British television commentator who labelled Luis Suarez "a cheat" following his controversial goal in Liverpool's FA Cup win at Mansfield on Sunday, has been spoken to by his employer.

Jon Champion, an experienced football broadcaster, made his views clear while working for satellite station ESPN who were carrying live coverage of the match between Premier League side Liverpool and fifth-tier Mansfield at the non-league club's Field Mill ground.

The ball hit Suarez on the right wrist before he put Liverpool 2-0 up in a game they eventually won 2-1 but the Uruguay striker's goal was allowed to stand by the referee.

However, as ESPN showed a replay of the incident, Champion said: "That, I'm afraid, is the work of a cheat."

But an ESPN statement issued Monday distanced themselves from Champion's comment, saying: "We take our responsibility to deliver the highest standards of coverage to our viewers.

"ESPN's editorial policy is for commentators to be unbiased and honest, to call things as they see them.

"Inevitably this can involve treading a fine line on occasion, especially in the heat of the moment.

"Comments during the Mansfield v Liverpool match caused offence where none was intended and we have spoken to our commentator about this incident."

Sunday's incident was just the latest in a series of flashpoints that have dogged Suarez since his arrival in English football, with the most high-profile being his ban for racially abusing Manchester United's Patrice Evra last season.

"If it was someone else we probably wouldn't even be discussing it," said Liverpool manager Brendan Rodgers of Suarez's goal after Sunday's match. "Sometimes these sorts of things will follow players."

"That's part of his life. He deals with it remarkably well. He's got thick skin. He's had it throughout his life and his career in this country."

"What exactly was Suarez supposed to do?," Hansen wrote in his column in Monday's Daily Telegraph.

"Run to the referee and tell him it hit his hand? His team-mates would go berserk, and his manager would not be too impressed either.

"The first thing to make clear is Liverpool's second goal in the third round cup tie was not a deliberate handball."

Hansen added: "He (Suarez) did exactly what anyone who has ever played professional football -- and anyone who plays in the future -- would do in the same situation.

"Yesterday, Suarez simply followed the golden rule every youngster is taught when he first plays football. 'Play to the whistle.' If that whistle does not come, it's the fault of the referee, not the player."

Comments
Topics mentioned in this article
Football Manchester United Manchester City Bolton Wanderers Arsenal Luis Suarez
Get the latest updates on ICC T20 Worldcup 2022 and CWG 2022 check out the Schedule, Live Score and Medals Tally. Like us on Facebook or follow us on Twitter for more sports updates. You can also download the NDTV Cricket app for Android or iOS.