Ciro Immobile scored in Lazio's final game of the season to match Argentina forward Gonzalo Higuain's record of 36 goals, set while playing for Napoli in the 2015-16 season. 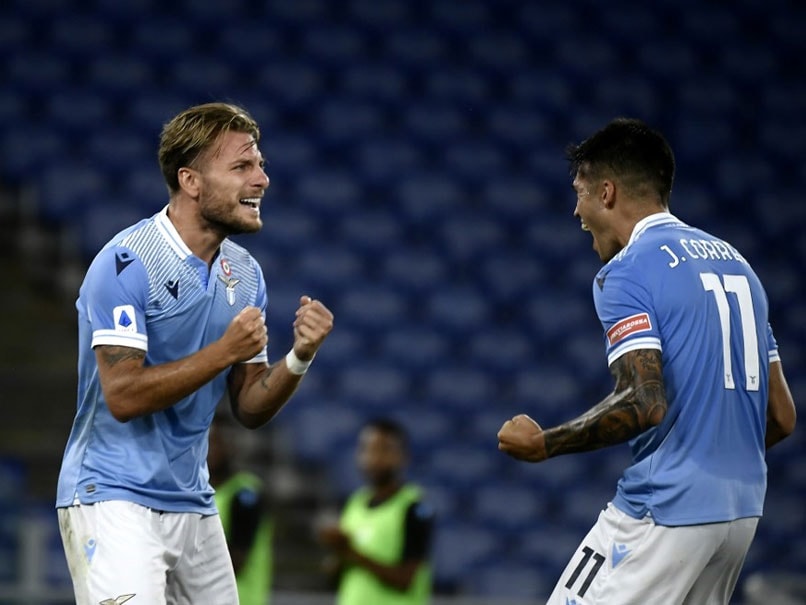 Lazio forward Ciro Immobile (L) equalled the record for the most goals in a Serie A campaign.© AFP

Lazio forward Ciro Immobile scored his 36th goal of the season on Saturday in a 3-1 defeat against Napoli to equal the record for the most goals in a Serie A campaign. The 30-year-old Italy international tapped in after 22 minutes to match Argentina forward Gonzalo Higuain's record of 36 goals, set while playing for Napoli in the 2015-16 season. Immobile also wins the European Golden Shoe for the continent's top scorer this term, having overtaken Bayern Munich striker Robert Lewandowski's tally of 34 in midweek.

Fourteen of his goals were from the penalty spot, as Lazio finished the season in fourth place, earning a return to the Champions League.

It is the third time Immobile has won the title of best scorer in Italy after 2013-2014, when he scored 22 goals with Torino, and in 2017-2018 when his 29 goals for Lazio saw him share the honour with Inter Milan's Mauro Icardi.

Cristiano Ronaldo missed out on winning a first 'Capocannoniere' award for top scorer in the Italian top flight, as he was rested for Juventus's final game, a 3-1 defeat to Roma.

Juventus had already wrapped up their ninth straight league title and are looking towards their last 16 home game against Lyon next Friday when Maurizio Sarri's side need to overturn a 1-0 first-leg deficit.

Inter Milan took second place with a 2-0 win over direct rivals Atalanta in Bergamo, who fell to their first league defeat since January.

Inter Milan finish just one point behind the champions after winning the three-team race for second spot.

Antonio Conte's side ended Atalanta's 17-match unbeaten run going back to January 20, to finish the season on a high before they play Getafe in the Europa League next week.

Robert Lewandowski Football
Get the latest updates on T20 World Cup, check out the T20 World Cup Schedule and Live Score . Like us on Facebook or follow us on Twitter for more sports updates. You can also download the NDTV Cricket app for Android or iOS.