Chelsea And Arsenal Power On In Europa League

Unai Emery selected a youthful Arsenal to play in the Ukraine and they romped past Vorskla Poltava 3-0. 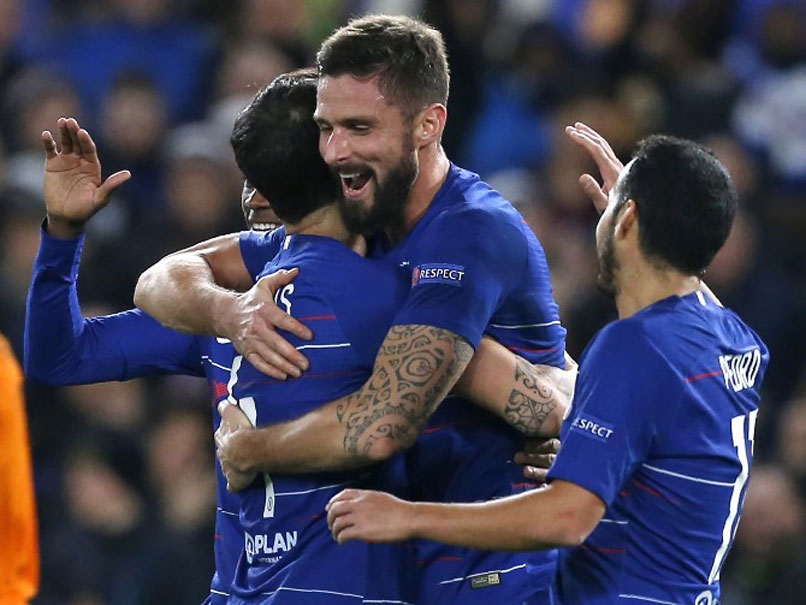 Chelsea beat PAOK Salonika 4-0 to win their group with a brace from Olivier Giroud.© AFP

Londoners Chelsea and Arsenal both enjoyed high-scoring Europa League wins on Thursday as Glasgow giants Celtic and Rangers were left with work to do on the final matchday to qualify for the next stage. Unai Emery selected a youthful Arsenal to play in the Ukraine and they romped past Vorskla Poltava 3-0, guaranteeing top spot in Group E in a match switched to freezing Kiev after security concerns in the east of the country.

Teenagers Emile Smith Rowe and Joe Willock scored either side of an Aaron Ramsey penalty as the Gunners went in 3-0 at half-time.

Vorskla Poltava's coach had complained that the switch forced by UEFA had deprived the city of a "holiday", and had also distracted his players.

Arsenal will now avoid any of the Champions League drop outs in the draw for the next round as they have a better head-to-head record with second-placed Sporting Lisbon.

Maurizio Sarri had demanded a reaction from his Chelsea side after they lost at Tottenham in the Premier League and the Blues answered his call, beating PAOK Salonika 4-0 to win their group with a brace from French target man Olivier Giroud.

"The main target was to win, we needed a strong team reaction and we did it well tonight," said the World Cup winner Giroud.

"I am really happy with the team spirit and we can move forwards now and start some new momentum.

"I've scored goals in the past but it's true that I was waiting for more chances," said Giroud, who broke a long streak without a goal in the last round.

"You need a bit of luck in front of goal. I had a good assist from my team-mates, I love this kind of ball behind the defence.

"Four goals plus a clean sheet, a good night for us. When the manager starts me I try to give my best, do my part."

Down to the wire

Celtic still need a final day draw to go through after beating pointless Rosenborg away for the second year in a row thanks to Scott Sinclair's emphatic header just before the break.

The Scots can thank Austrian outfit RB Salzburg, who won Group B outright with a victory over their German sister club RB Leipzig 1-0. The Germans now have to win in Glasgow to qualify ahead of Celtic.

Rangers drew 0-0 at home with Spain's Villarreal, keeping their hopes of last day qualification from Group G alive a point behind the Spaniards and Rapid Vienna who are both on seven.

Bayer Leverkusen, Zurich, Dinamo Zagreb, Arsenal, Frankfurt, Lazio and Chelsea were already qualified before Thursday's games when Salzburg, Sporting Lisbon, Real Betis, Zenit Saint-Petersburg, Dynamo Kiev, Krasnodar and Fenerbahce all secured their place in the hat for the next round draw.

Sporting thumped six past Garabagh in Azerbaijan while in another high scoring game AC Milan emerged as 5-2 winners over minnows Dudelange of Luxembourg but need a draw with Olympiakos in the final game to qualify.

Arsenal Football
Get the latest updates on IND vs NZ 2021, check out the Schedule and Live Score . Like us on Facebook or follow us on Twitter for more sports updates. You can also download the NDTV Cricket app for Android or iOS.