Jeremy Chardy defeated Jurgen Melzer of Austria 7-5, 6-4, 7-5 in Friday's opening singles match to give the 2010 finalist France an early lead in the first round of the Davis Cup. 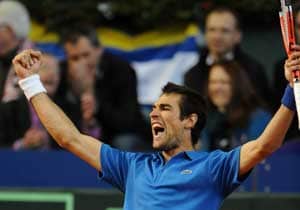 Jeremy Chardy defeated Jurgen Melzer of Austria 7-5, 6-4, 7-5 in Friday's opening singles match to give the 2010 finalist France an early lead in the first round of the Davis Cup.

The 55th-ranked Chardy, making his first appearance in the Davis Cup, dominated the pace of play for most of the clay-court match. He hit 14 aces and broke Melzer's serve six times.

Chardy converted his second matchpoint on Melzer's serve when the 10th-ranked Austrian sent a forehand into the net.

"I played very good today. I am happy for me and for the team," said Chardy, who had not won a set this year coming into this match, with his latest win on the ATP circuit dating back to October 2010.

Chardy praised France captain Guy Forget for preparing him to face Melzer, who reached the semifinals at the French Open last year.

"Guy gave me the right tactics, so I just had to stay focused," Chardy said. "He told me to have a good serve and to play aggressively against Jurgen and I managed to do that."

Forget called up Chardy as a replacement for Richard Gasquet, who pulled out last week with a sore right shoulder. France was also missing leading players Gael Monfils (hand) and Jo-Wilfried Tsonga (groin).

Later on Friday, Stefan Koubek was scheduled to play Gilles Simon in the second singles match.

Austria, which has not been past the first round since 1995, has never beaten nine-time champion France in seven previous meetings.

Comments
Topics mentioned in this article
Football Jeremy Chardy Tennis Jurgen Melzer
Get the latest updates on ICC T20 Worldcup 2022 and CWG 2022 check out the Schedule, Live Score and Medals Tally. Like us on Facebook or follow us on Twitter for more sports updates. You can also download the NDTV Cricket app for Android or iOS.