Real Madrid thwarted a second half comeback from Inter Milan to win 3-2 on Tuesday and give their Champions League bid lift-off in Group B. 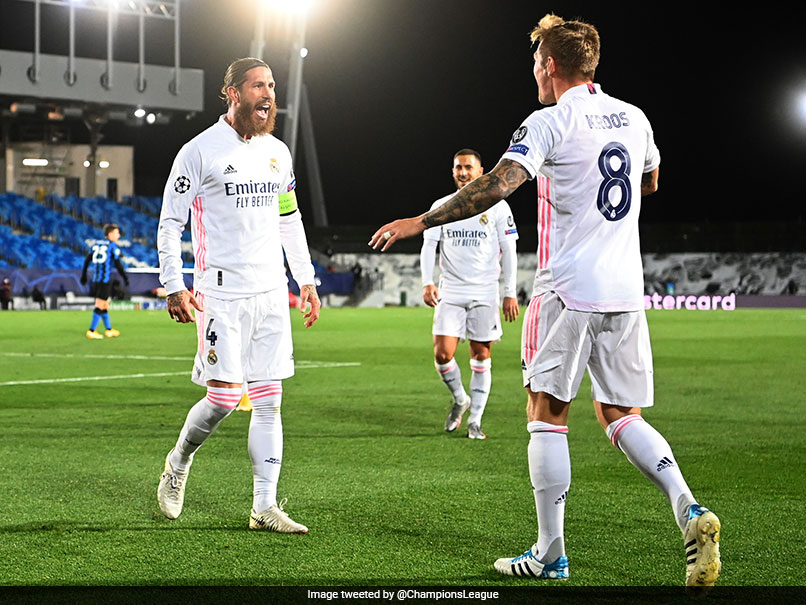 Real Madridthwarted a second half comeback from Inter Milan to win 3-2 on Tuesday and give their Champions League bid lift-off in Group B. Madrid's 19-year-old Brazilian Rodrygo came off the bench to score the winner at the empty Alfredo di Stefano stadium, where Inter threatened a remarkable turnaround after drawing level from two goals down. Lautaro Martinez and Ivan Perisic gave Inter hope of victory after Karim Benzema and Sergio Ramos had put Madrid in command, Ramos heading in a second after half an hour for his 100th Real Madrid goal.

But Rodrygo had the last word, his cool finish in the 80th minute earning Zinedine Zidane's side their first win to leave Inter with a mountain to climb if they are to make the last 16.

"It's three very important points for us," said Zidane. "We had to win and we did it with character, after suffering against a very good opponent. It wasn't easy."

These teams were expected to fight for the top two spots in the group but both came into this game on the back of stumbling starts, Inter taking two points and Madrid just one from opening games against Borussia Moenchengladbach and Shakhtar Donetsk.

Neither coach could afford another slip-up either after a bumpy few weeks. Antonio Conte's Inter have now won only one of their last seven games while Madrid appear to have turned a corner following consecutive losses last month.

"We have to keep our heads up and continue to work," said Martinez. "We are only missing some small details to win these kind of games.

"We know how difficult this competition is. We play well but always make some mistakes. You simply cannot afford that at this level."

"Real have players with a lot of experience," added Conte. "They know when to finish the game. We are missing a bit of that."

The lively Perisic replaced the injured Romelu Lukaku up front for Inter and Eden Hazard started for the second time this season for Madrid. The Belgian delivered only in glimpses before being taken off shortly after the hour.

Inter's right-back Achraf Hakimi also went up against the club that sold him for 40 million euros in July and although he was dangerous going forward, it was his poor backpass that led to Benzema's opening goal.

Madrid were the stronger side in the first half but conceded chances and were vulnerable on the break.

Marco Asensio went close after a cutback from Hazard before two Inter counters saw Nicolo Barella hit the crossbar and Martinez force a save from Thibaut Courtois.

Fede Valverde should have scored but scuffed a half-volleyed finish after a neat header from Benzema, who then did score, capitalising on Hakimi's error to round the goalkeeper and slot home.

When Ramos headed in Toni Kroos' corner in the 33rd minute, Madrid looked comfortable but in the 35th they let Inter back in, a sumptuous flicked backheel from Barella spinning into the path of Lautaro, who made no mistake.

Hazard went off just after the hour, with Madrid less dominant and Inter's confidence growing.

They equalised with the first real chance of the half as Perisic darted onto Martinez's header and finished into the far corner.

The game was in the balance. Lautaro curled over and Perisic fired wide, with Inter even looking the more likely to grab a winner.

But it was Madrid who struck again, the two substitutes combining on the break as Vinicius Junior sped clear on the left and crossed to Rodrygo on the right, his fellow Brazilian controlling and sweeping in.

Sergio Ramos Toni Kroos Football
Get the latest updates on ICC T20 Worldcup 2022, check out the Schedule and Live Score. Like us on Facebook or follow us on Twitter for more sports updates. You can also download the NDTV Cricket app for Android or iOS.