Bayern Munich will look to repeat their 2013 triple of Champions League, Bundesliga and German Cup titles. 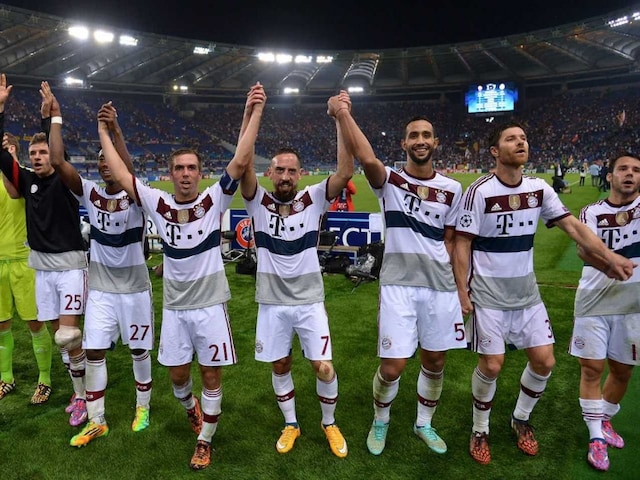 Pep Guardiola begins his third -- and possibly final -- Champions League campaign with Bayern Munich on Wednesday knowing that only a repeat of the 2013 victory will sate the Bavarians' appetite. (Barcelona Begin Title Defence)

By his own admission, "only the treble counts" in Munich as the Spaniard attempts to repeat Bayern's 2013 triple of Champions League, Bundesliga and German Cup titles.

The 44-year-old won the Champions League in 2009 and 2011 as Barcelona coach, but in his two seasons with Bayern, the German champions were found wanting at the semi-final stage by Real Madrid in 2013/14, then Barcelona last season.

"The main objective is -- and remains -- winning the Champions League," said striker Thomas Mueller, who turned 26 on Sunday, before Bayern jetted to Greece. (Roma Hope to Banish Bayern Blues)

Guardiola's current contract expires at the end of the season and the Spaniard, who has given no hint of his future plans, wants another European crown to add to his already impressive CV.

Bayern have won all four of their opening German league matches this season, but had to come from behind to force a 2-1 win at home to Bavarian rivals Augsburg on Saturday with two late goals.

Now the 2013 Champions League winners switch their focus to Europe at Olympiakos when they kick off their Group F campaign, but Guardiola is warning they can ill afford another below-par display with Arsenal also in their pool.

A warm welcome awaits in Greece in front of 33,000 home fans at the sold-out Karaiskakis Stadium and the 1700 visiting fans will receive police protection.

"Everyone has to give their all there and put in 100 percent on the pitch, or things can go astray," warned Guardiola.

Bayern are second in the Bundesliga table on goal difference behind Borussia Dortmund, while Marco Silva's Olympiakos top the Greek Superleague table as the only team with three wins from three matches.

Bayern are unbeaten in their seven games against sides from Greece in the Champions League and the five-time winners have won their opening games in Europe for the last 11 successive campaigns.

"For Olympiakos, this is a big game, they will be very aggressive and will give their all," said Germany defender Jerome Boateng.

"We have to be very focused and show from the outset that we want to win."

Mario Goetze is expected to return after Bayern's 23-year-old Germany international forward missed the Augsburg win with a leg injury, but was back in training on Sunday.

Guardiola will be without wingers Franck Ribery, who has missed the last six months with an ankle injury, and Arjen Robben, who is out for a month with a groin problem.

Bayern were caught napping away from home when they suffered a shock 3-1 defeat at BATE Borisov in October 2012 and they will want no repeat in Greece.

"We are FC Bayern. We want to hear the Champions League anthem. We want these special games," said Bayern midfielder Thiago Alcantara.

Starting with Olympiakos, Bayern play three games in six days as they face newly-promoted Darmstadt on Saturday in the Bundesliga, then host last season's Bundesliga runners-up Wolfsburg on Tuesday September 22.

Comments
Topics mentioned in this article
Bayern Munchen Olympiacos Football
Get the latest updates on IPL 2020, check out the IPL Schedule for 2020 and Indian Premier League (IPL) Cricket live score . Like us on Facebook or follow us on Twitter for more sports updates. You can also download the NDTV Cricket app for Android or iOS.