Barcelona qualified for the Champions League last 16 with two games to spare on Tuesday as Martin Braithwaite scored twice in a 4-0 win over Dynamo Kiev. 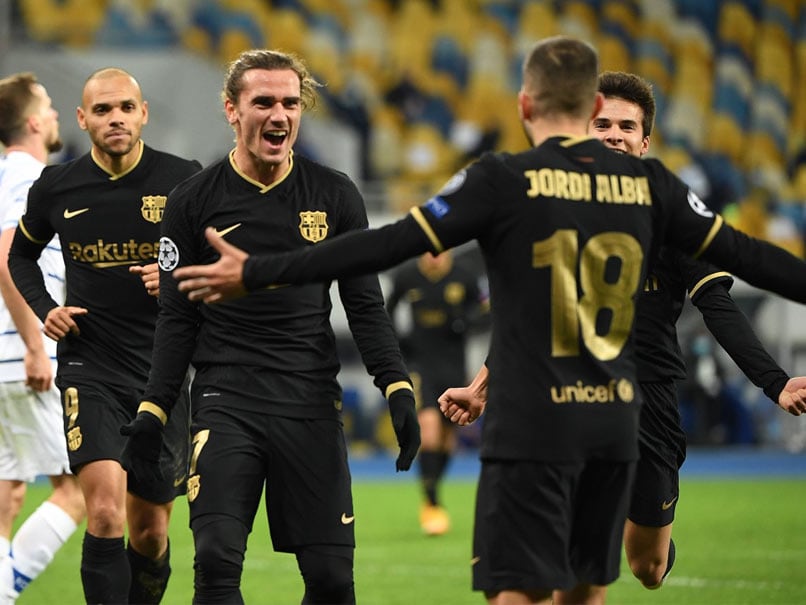 Antoine Griezmann scored a goal in the injury time for Barcelona on Tuesday.© AFP

Barcelona qualified for the Champions League last 16 with two games to spare on Tuesday as Martin Braithwaite scored twice in a 4-0 win over Dynamo Kiev. Lionel Messiwas among a handful of key players rested for Barca but Braithwaite's double, as well as goals from Sergino Dest and substitute Antoine Griezmann saw the Catalans safely through, joining Juventus in progressing from Group G. First and second place are still to be settled, with Barcelona playing away at Ferencvaros next week before a potential decider at home to Juve, who beat the Hungarian side 2-1 in Turin thanks to a late Alvaro Morata winner.

"We've achieved our objective," said Ronald Koeman. "We looked hungry and scored four goals. Important players were able to rest and the youngsters have deserved their minutes."

After taking maximum points from their first three games, Koeman took the chance to rotate in Kiev as Messi and Frenkie de Jong were left out of the squad completely while Jordi Alba and Griezmann were both on the bench.

Instead, Koeman named a youthful line-up that included a senior debut for Oscar Mingueza in central defence, with Francisco Trincao, Pedri and Carles Alena also given chances to impress.

There will certainly be tougher opponents than Dynamo to navigate but the 21-year-old Mingueza was composed and may be trusted again given Barcelona's current shortage in defence. Gerard Pique, Samuel Umtiti and Ronald Araujo are all out injured.

"He's shown that we can count on him," said Koeman.

Braithwaite certainly did his case no harm by taking his total number of goals for Barca from one to three in 13 minutes, the second a penalty, and a deserved return for a tireless performance up front.

Victory also continues Barca's excellent form in Europe, which comes in stark contrast to their struggles in La Liga, where they sit 12th in the table following Saturday's 1-0 defeat by Atletico Madrid.

Dynamo were also depleted, without their top scorer Viktor Tsyhankov, who was ill, and they never really threatened their opponents like they did in the return fixture last month.

They will now battle Ferencvaros for third place and qualification for the Europa League.

Barcelona dominated the ball in the first half but were unable to breach a determined Dynamo defence, even if there was little threat from the home side, even on the break.

The opening goal came from an unlikely source as Dest fired a pass into Alena and while the ball was returned to Braithwaite on the edge of the box, Dest took over, carrying it into his stride and shooting into the far corner for his first goal for the club.

Braithwaite's time would come five minutes later as he finished off Alena's corner at the back post and then he made it three from the penalty spot, after being pushed in the back by Denys Popov as he tried to head in Alba's cross.

Popov had already blazed wide what was perhaps Dynamo's best chance at the back post while Koeman had made changes bringing on Griezmann, Alba and Riqui Puig.

Puig should have added a fourth but skied Dest's cutback over before Griezmann did, capping a lively cameo by driving in and rounding off a comfortable victory.