Gerard Pique's absence leaves Barcelona with Clement Lenglet as their one fit central defender, given Samuel Umtiti and Ronald Araujo are also out injured. 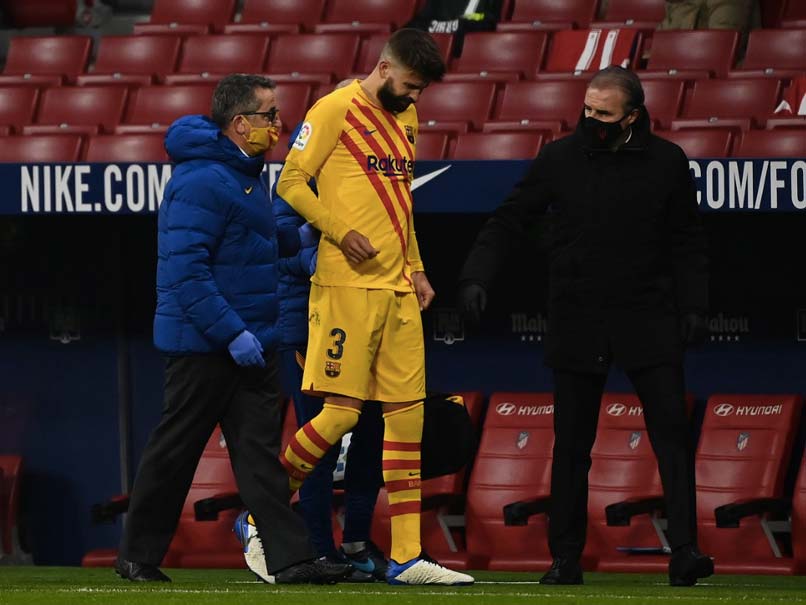 Gerard Pique cried as he hobbled off the pitch during Barcelona's 1-0 defeat against Atletico Madrid.© AFP

Barcelona's Gerard Pique has sustained a serious knee injury, the club confirmed on Sunday, with the defender expected to be out for at least two months. Pique cried as he hobbled off the pitch during Barca's 1-0 defeat against Atletico Madrid in La Liga on Saturday following a collision with Angel Correa. "Tests have shown that he has a grade 3 sprain in the internal lateral ligament and partial injury to the anterior cruciate ligament in his right knee," said Barcelona in a statement.

The club also confirmed that Sergi Roberto, who can play right-back or central midfield, will be out for two months after tearing a muscle in his thigh.

There was no official estimate for Pique's return but reports in the Spanish press have suggested he could be out for anything between two and six months.

Pique's absence leaves Barca with Clement Lenglet as their one fit central defender, given Samuel Umtiti and Ronald Araujo are also out injured.

Frenkie de Jong has occasionally dropped into defence in recent weeks but the situation is far from ideal for Ronald Koeman, whose side slipped to their third league loss of the season against Atletico.

Barca sit 10th in La Liga but have fared better in the Champions League, sitting top of Group G with nine points out of nine ahead of Tuesday's game away at Dynamo Kiev.

Atletico Madrid Sergi Roberto Football
Get the latest updates on India vs South Africa and check out  Schedule, Results and Live Score. Like us on Facebook or follow us on Twitter for more sports updates. You can also download the NDTV Cricket app for Android or iOS.