Atletico Madrid recorded their first league victory over Barcelona in 10 years, which put them three points ahead of Real Madrid, with a game in hand, and second in the table. 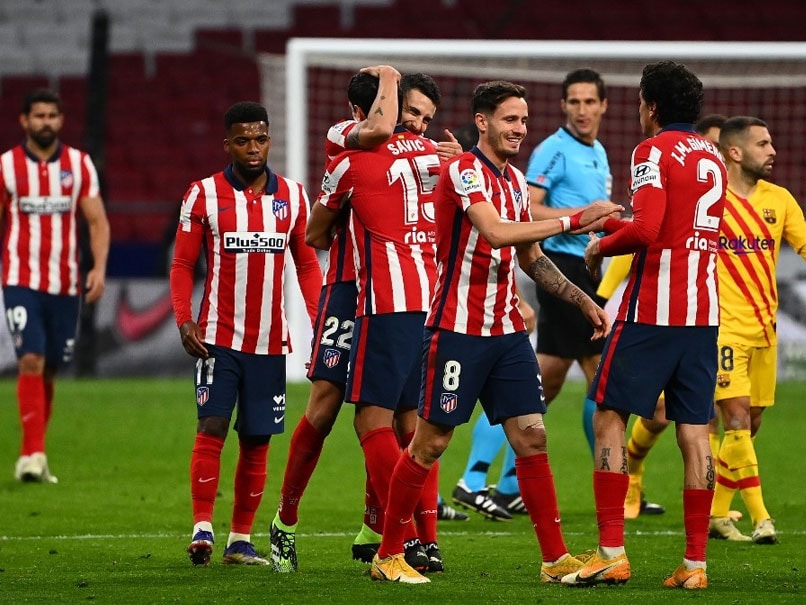 Atletico Madrid delivered a major boost to their hopes of winning La Liga on Saturday by beating Barcelona 1-0 and consigning their opponents to their worst start to a league season in 29 years. Yannick Carrasco finished brilliantly from range after mistakes from Gerard Pique and Marc-Andre ter Stegen left the goal gaping but Barca, and a below-par Lionel Messi, failed to respond at the Wanda Metropolitano. Instead, Atletico recorded their first league victory over Barcelona in 10 years, which puts them three points ahead of Real Madrid, with a game in hand, and second in the table, level on points with early leaders Real Sociedad.

It also leaves their opponents languishing in 10th, with Barcelona's 11 points from their first eight games their worst tally at this stage since the 1991-92 season.

"Like any coach, I am responsible," said coach Ronald Koeman. "We know we have to improve the results. I continue to trust the players I have."

Real Madrid had earlier been held to a 1-1 draw by in-form Villarreal, another slip-up for the reigning champions to enforce the sense that this could be Atletico's year.

And beating Barcelona in La Liga for the first time since 2010 -- before Simeone arrived as coach -- will do wonders for the team's belief and extends what is now a considerable advantage in the table.

It also extends Atletico's unbeaten run in the league to 24 matches.

"Today we were able to win but it absolutely doesn't change anything," said Simeone. "We're working well and I'm excited about this team."

Another disappointing day for Barca was soured further by the sight of Pique hobbling off in tears with what the club said was a "sprained right knee".

Pique was hurt during a collision with Angel Correa and was in distress as he departed.

"I am worried," said Koeman. "A lot of damage has been done."

Antoine Griezmann almost put Barca in front against his old club while Marcos Llorente went closest for Atletico, skimming the crossbar after a neat exchange between Kieran Trippier and Correa down the right.

Messi might have scored but was uncharacteristically hesitant, with an even half about to finish goalless until two errors gifted Atletico the lead.

Pique was caught out of position after a heavy touch and Mario Hermoso did well to free Carrasco. Ter Stegen, already upfield, rushed out to fill the gap Pique had left but Carrasco's first touch feathered the ball through the goalkeeper's legs before a curling finish from 50 yards sent the ball into the open net.

Clement Lenglet should have equalised but headed Messi's cross straight at Jan Oblak yet Barcelona were far from dominant and Messi struggled for his usual influence.

Philippe Coutinho came on and Pique hobbled off. Messi floated a free-kick wide and saw a shot blocked before substitute Martin Braithwaite was given a late chance after a poor kick by Oblak. But Barca were unable to find a way through.

Earlier, a patched-up Real Madrid had to hang on for a draw against Villarreal.

"It feels like a small reward," said Zidane. "We deserved more today for the game we played. I'm annoyed because of the effort from the boys."

Mariano was almost sold last summer but had to stand in for Karim Benzema, who is injured, and Luka Jovic, who tested positive for coronavirus on Friday.

Sergio Ramos, Eder Militao and Casemiro were all missing following the international break, leaving Nacho Fernandez and an unfit Raphael Varane to fill in at the back, while Martin Odegaard made a rare start in midfield.

Given the absentees, a draw may not worry Zidane too much, particularly against a buoyant Villarreal side who sat second at kick-off after four victories on the bounce.

But another slip means Madrid have now won only three of their last seven games in all competitions, with a crucial visit to Inter Milan to come in the Champions League on Wednesday.