Cole posted a series of messages on his Twitter account on Tuesday in which he suggested he was expecting to leave Upton Park and West Ham confirmed that he would not be offered a new contract. 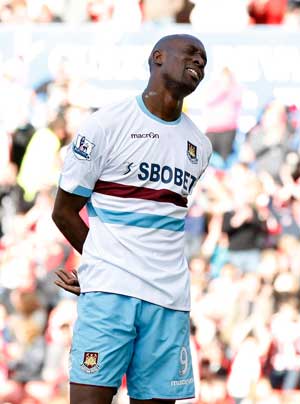 Cole, 29, posted a series of messages on his Twitter account on Tuesday in which he suggested he was expecting to leave Upton Park and West Ham confirmed that he would not be offered a new contract.

"Carlton's contract has come to an end and we have decided not to renew that contract," said manager Sam Allardyce.

"Carlton's need at his age is to be playing football as often as he can. From our point of view, we felt it better that he found pastures new.

"We can only thank him for his outstanding commitment and service to West Ham United over the last seven years."

Cole joined West Ham from London rivals Chelsea in July 2006 and scored 59 times in 237 appearances, but his return this season was a disappointing two goals from 25 games.

Writing on Twitter on Tuesday, he said: "Life is filled with ups & downs today is a down but I'll be back! Carlton Cole/CFC as I have been called has left the building.

"I want to thank the West Ham fans for their support especially the 1's who made the away games feel like a home 1 #COYI (Come on you Irons).

"I came to East London not knowing what to expect but I'm glad i did the last 7 years I've met a lot of good honest decent people #THANKYOU."

West Ham made their first signing of the transfer window on Tuesday, when Romania captain Razvan Rat arrived on a free transfer from Ukrainian champions Shakhtar Donetsk.

The experienced 31-year-old left-back, who has won 88 caps for his country, has signed a one-year contract.

Meanwhile, British media reports on Wednesday claimed West Ham have also agreed a transfer fee with Liverpool for striker Andy Carroll, who spent the season on loan at Upton Park.

The 24-year-old withdrew from the England squad late on Tuesday with a foot injury.

Comments
Topics mentioned in this article
Football Bayern Munchen West Ham United Chelsea Andy Carroll Carlton Cole
Get the latest Cricket news, check out the India cricket schedule, Cricket live score . Like us on Facebook or follow us on Twitter for more sports updates. You can also download the NDTV Cricket app for Android or iOS.