Russia's newly-appointed Italian manager Fabio Capello recorded a 1-1 draw in his debut match with the country's national team -- a friendly against Ivory Coast here on Wednesday. 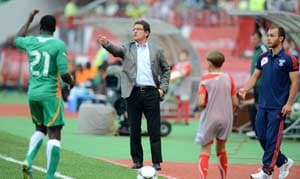 Russia's newly-appointed Italian manager Fabio Capello recorded a 1-1 draw in his debut match with the country's national team -- a friendly against Ivory Coast here on Wednesday.

CSKA Moscow modfielder Alan Dzagoev scored for Russia, while Saint-Etienne's Max Gradel was on target for the visitors to record a draw in the two teams' first ever head-to-head meeting.

Russia took to the pitch at Moscow's Lokomotiv arena without forward Andrei Arshavin but looked more confident and began testing an Ivory Coast defence marshalled by 'keeper Daniel Yeboah from the start.

Roman Pavlyuchenko had a chance to put Russia in front in the 11th minute but his powerful 22-metre freekick was confidently stopped by Yeboah.

After the 20th minute the guests, who looked physically much stronger than the hosts, grabbed the initiative and replied with a series of attacks down the right sparked by Gradel and Kader Keita but to no immediate avail.

Ivorian skipper Didier Drogba was also awarded a mid-range freekick in the 22nd minute but his shot went just inches wide off the right post.

Russia took the initiative back after the half-hour mark, pinning the visitors back, but failed to create any serious threat before the break.

After the interval Russia still looked in command and in the 55th minute Dzagoev lifted the hosts 1-0 up, firing the ball into the left corner of Yeboah's net with a well-struck 25-metre freekick.

The Ivorians poured onto the attack seeking an equaliser and in the 68th minute Manchester City midfielder Abdul Razack had a clear chance, but his powerful shot from just outside the six-yard box came back off the woodwork.

But in the 77th minute Gradel levelled, sending home a rebound with a close-range header after his initial 12-metre header hit the crossbar.

Chances fell to both sides in the closing stages but neither was able to conjure a winner.

Comments
Topics mentioned in this article
Roman Pavlyuchenko Football John Terry England Didier Drogba
Get the latest updates on ICC T20 Worldcup 2022 and CWG 2022 check out the Schedule, Live Score and Medals Tally. Like us on Facebook or follow us on Twitter for more sports updates. You can also download the NDTV Cricket app for Android or iOS.