England manager Fabio Capello on Thursday shrugged off his team's goalkeeping crisis ahead of their crucial Euro 2012 qualifier against Bulgaria. 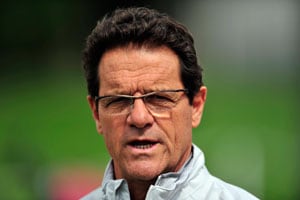 England manager Fabio Capello on Thursday shrugged off his team's goalkeeping crisis ahead of their crucial Euro 2012 qualifier against Bulgaria.

England arrived in Sofia on Thursday with only one goalkeeper in their squad - Manchester City's Joe Hart - boasting previous international experience, with neither David Stockdale and Frankie Fielding having a cap between them.

The presence of Stockdale and Fielding - who both ply their trade in the second tier of English football at Ipswich and Derby respectively - has highlighted the dearth of goalkeeping options available to Capello.

Injury has deprived the Italian coach of West Ham keeper Rob Green for the trip to Sofia, while previous squad regulars Paul Robinson of Blackburn and West Brom's Ben Foster have made themselves unavailable for selection.

Capello took a thinly veiled dig at the self-imposed exile of players like Foster, and said he had not been tempted to try and persuade the Baggies stopper to make himself available.

"I've got a good keeper in Hart, and the other keepers are good, young keepers," Capello told a press conference.

"As a player I was proud to play with the Italian team," Capello added.

"I think the players that are here, are proud to stay with us, to wear the England shirt.

"I selected 25 players this time and I picked the first XI, the substitutes and the others who wanted to stay.

"It's important for the players that stay here to be proud to wear the England shirt."

Capello meanwhile said he was happy to include Manchester United youngsters Tom Cleverley, Chris Smalling and Phil Jones in his squad, and said all three were capable of stepping up to international level if called upon.

Cleverley, Smalling and Jones have been in superb early season form for United, and a fourth Old Trafford youngster, Danny Welbeck, would also have travelled to Sofia but for injury.

"I'm lucky because I've seen these players play very well. The performances were always at the top. I know these players from the Under 21s," Capello said.

"I followed them for a long time. Now they are playing in the Premier League, with an important team. For this reason they are ready for us."

Capello declined to offer any clue as to whether any of the latest batch of United youngsters would start on Friday, where England are chasing a win which will see them edge closer to qualification from Group G.

"I will see tomorrow (Friday)," he said. "The game we play tomorrow is a very important game. And the team we are playing is playing very well. I saw them play against Montenegro very well," he added.

Nevertheless Capello is confident his team is capable of securing a win in the Vasil Levski Stadium against a Bulgarian side who were beaten 4-0 at Wembley a year ago.

Capello believes playing away from Wembley may even suit England better.

"Sometimes the players find it difficult to play against teams but away we can play with more space and attack that space with fast players," he said. "Sometimes we play better away from home."