Schalke's poor season start continued with a 2-1 loss at Hannover, where the visitors finished with nine players and the hosts 10. Bayer Leverkusen beat Borussia Moenchengladbach 4-2, and Freiburg drew 3-3 at Hoffenheim, where three players were sent off. 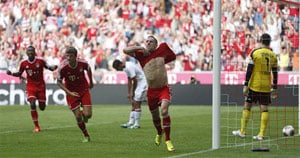 Bayern Munich earned their third straight win of the season with a 2-0 victory over Nuremberg on Saturday, but still found themselves third on goal difference in the Bundesliga.

The win at Munich's sold-out Allianz Arena in front of 71,000 fans marks the start of a busy seven-day period for Bayern who have an away league game at Freiburg on Tuesday, then travel to Prague for Friday's showdown with Chelsea for UEFA'S Super Cup.

Guardiola started with a star-studded attacking midfield with wingers Robben and Ribery either side of Spain's Thiago Alcantara and Germany playmaker Mario Goetze, who made his debut for Bayern after joining from Borussia Dortmund.

The hosts rode their luck in the first-half as only the crossbar denied Nuremberg when striker Daniel Ginczek's shot clattered off the underside with Munich goalkeeper Manuel Neuer beaten on 15 minutes.

Bayern were awarded a penalty on 33 minutes by referee Christian Dingert when Robben was brought down by Sweden defender Per Nilsson, but the replay showed the Dutchman used his hand to keep the ball from going out.

With time running out, Ribery headed home before a crisp shot from Robben on 78 minutes to maintain Bayern's 100 percent record this season in the league.

Schalke, who need to win at Greece's PAOK on Tuesday to progress to the Champions League group stages after drawing 1-1 in Wednesday's play-off first-leg, suffered another confidence-sapping defeat as they lost 2-1 at Hanover 96.

The guests had defender Benedikt Hoewedes sent off on 14 minutes for bringing down Hanover striker Mame Diouf with only the goalkeeper to beat and Hungary midfielder Szabolcs Huszti drilled home the penalty.

Diouf then headed home three minutes from the break to leave Schalke reeling before striker Adam Szalai pulled one back for Schalke in the second-half.

Having also been hammered 4-0 at Wolfsburg last Saturday, Schalke have just one point from their first three games, leaking nine goals and scoring four, leaving them 14th in the table.

Another defeat at PAOK will leave coach Jens Keller in a precarious position.

Mainz are the fourth team to maintain a 100 percent record after they enjoyed a 2-0 win at home to VfL Wolfsburg, who had new signing Luiz Gustavo sent off for a second yellow card on just his second appearance since signing from Bayern.

Hoffenheim were held to a 3-3 draw at home by Freiburg in an action-packed game which saw each side finish with 10 men and Freiburg coach Christian Streich was banished to the stands.

Later on Saturday, Hamburg desperately need a win at Hertha Berlin in the capital after Thorsten Fink's side were pounded 5-1 at home by Hoffenheim last weekend.

Comments
Topics mentioned in this article
Football Borussia Dortmund France VfB Stuttgart Bayern Munchen Lionel Messi Xavi Jaume Shinji Okazaki Franck Ribery Patrice Evra Arjen Robben
Get the latest updates on ICC T20 Worldcup 2022 and CWG 2022 check out the Schedule, Live Score and Medals Tally. Like us on Facebook or follow us on Twitter for more sports updates. You can also download the NDTV Cricket app for Android or iOS.