Bundesliga: Players Won't Be Punished For Not Social Distancing While Celebrating 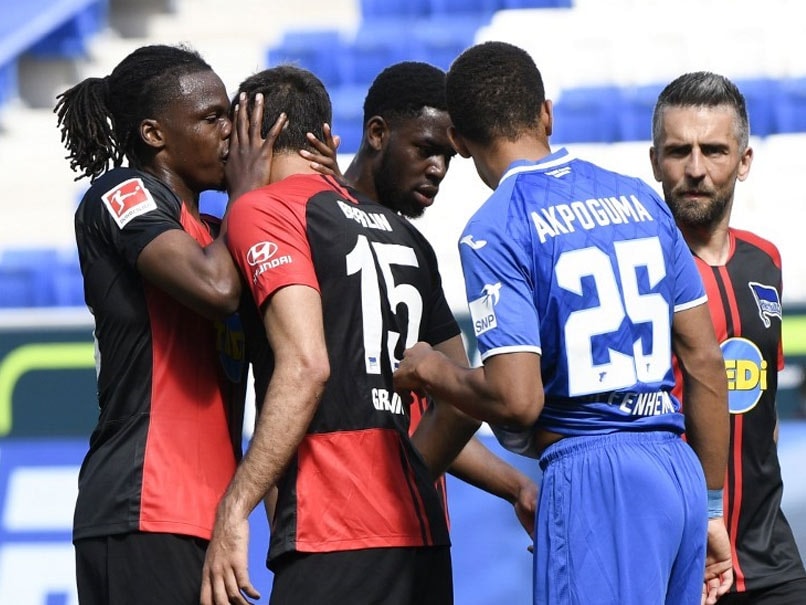 The German Football League has confirmed that the players would not be punished if they do not follow social distancing during goal celebrations. Few eyebrows were raised on Saturday when Hertha Berlin defender Dedryck Boyata kissed team-mate Marko Grujic on the cheek to celebrate an own goal from Hoffenheim's Kevin Akpoguma. Hertha Berlin went on to defeat Hoffenheim 3-0. "On the subject of goal celebrations, it was something that was merely advised in the guidelines - sanctions are therefore not necessary," goal.com quoted German Football League spokesperson as saying.

Coach of Hertha Berlin, Bruno Labbadia also defended his players and said that all the players of his side tested negative for the coronavirus.

"I hope that people outside understand this. It is only a recommendation to hold back. We have been tested negative six times, most recently yesterday. Emotions are also a part of it. Otherwise, there is no point in playing the game," Goal.com quoted Labbadia as saying.

However, on Saturday, during another match between Borussia Dortmund and Schalke 04, all players of the Dortmund side followed social distancing while celebrating goals.

The matches were played behind closed doors and there were many significant changes to see for the viewers watching on television.

There were no customary handshakes before the start of the match as both teams came out to the playing field from different sides of the ground.

1899 Hoffenheim Dedryck Boyata Marko Grujic Football
Get the latest updates on ICC T20 Worldcup 2022, check out the Schedule and Live Score. Like us on Facebook or follow us on Twitter for more sports updates. You can also download the NDTV Cricket app for Android or iOS.