Bundesliga: Kai Havertz scored in a 1-0 victory at Freiburg which moved Bayer Leverkusen into third place in the table. 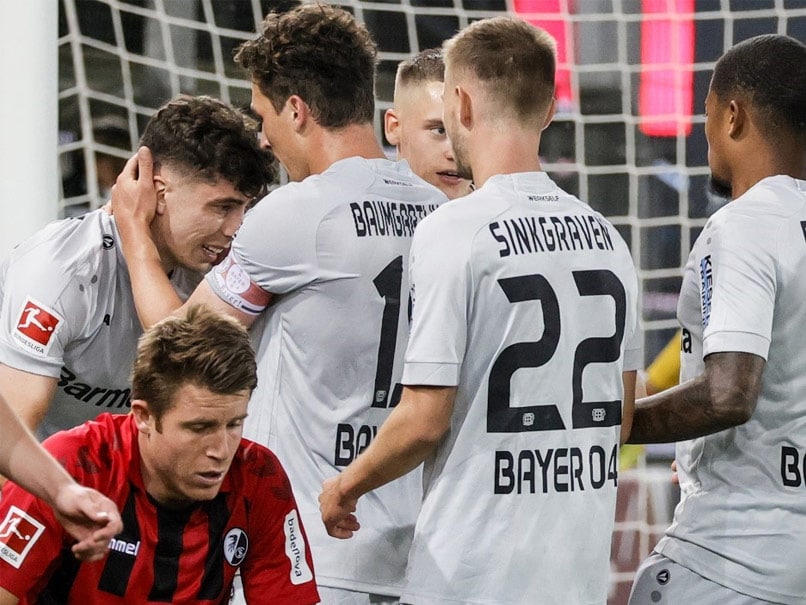 Kai Havertz became the first player in the history of the league to reach 35 goals before turning 21.© AFP

Exciting youngster Kai Havertz broke another Bundesliga record on Friday after scoring the winner in a 1-0 victory at Freiburg which moved Bayer Leverkusen into third place. Kai Havertz, 20, became the first player in the history of the league to reach 35 goals before turning 21 years old eight minutes after the break, when he combined with Leon Bailey before squeezing home under intense pressure from Dominique Heintz. The dynamic German was already the youngest player to reach 50 and 100 appearances in the German top flight and became the youngest ever player to score a league goal for Leverkusen in 2017.

Havertz's goal was his fifth in his four appearance since the Bundesliga returned from its coronavirus-enforced break and puts Leverkusen a point ahead of fourth-placed RB Leipzig, who travel to Cologne on Monday night.

They are also three points ahead of Borussia Moenchengladbach in fifth ahead of their match with Union Berlin on Sunday.

Havertz's goal was the first shot on target in a largely drab encounter in which Freiburg could have snatched at least a point.

Lucas Hoeler missed a glaring opportunity for the hosts two minutes before the break, pushing wide when sent through one-on-one with Leverkusen stopper Lukas Hradecky.

And chasing an equaliser late on, Nils Petersen forced Hradecky to save the three points for Leverkusen with a fine first time strike that the goalkeeper did well to tip away.

SC Freiburg Football
Get the latest updates on Fifa Worldcup 2022 and check out  Fifa World Cup Schedule, Stats and Live Cricket Score. Like us on Facebook or follow us on Twitter for more sports updates. You can also download the NDTV Cricket app for Android or iOS.