Bundesliga became the first top European league on Saturday to resume during the coronavirus pandemic. 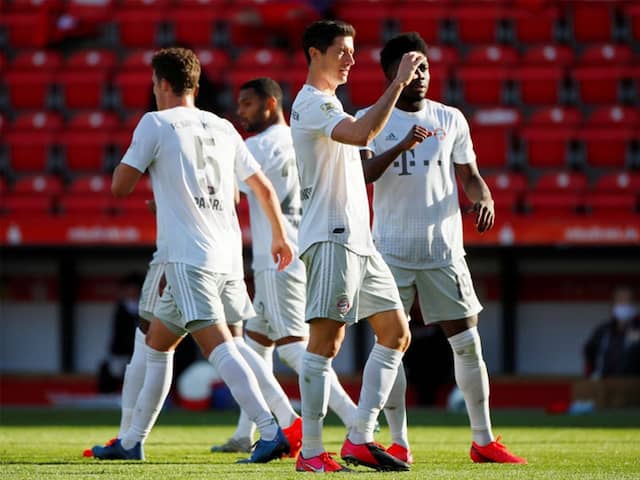 Robert Lewandowski bagged his 26th league goal this season as leaders Bayern Munich restarted the Bundesliga season with a 2-0 win at Union Berlin behind closed doors on Sunday. Lewandowski netted a first-half penalty and defender Benjamin Pavard scored a late header for Bayern in Berlin after the Bundesliga became the first top European league on Saturday to resume during the COVID-19 pandemic.

Poland star Lewandowski, who missed two games with injury before the league was interrupted in mid-March, reached 40 goals for the campaign in all competitions as Bayern restored their four-point lead over Borussia Dortmund.

Dortmund, who thrashed Schalke 4-0 in the Ruhr derby on Saturday, host Bayern in a pivotal fixture in 10 days' time, another game that will be behind closed doors due to the league's strict hygiene guidelines.

Union had shocked previous leaders Dortmund and Borussia Moenchengladbach earlier in the season, backed by passionate home support at their Alten Foersterei stadium.

However, with the players' voices echoing around the Union stadium, Bayern dominated their mid-table opponents.

Thomas Mueller looked to have given Bayern an early lead on 18 minutes when Serge Gnabry presented him with a simple tap-in.

However, the goal was disallowed when the video assistant referee (VAR) spotted Mueller was offside.

With Bayern enjoying around 70 percent possession, it was just a matter of time before they took the lead.

Sure enough when Union defender Neven Subotic fouled Leon Goretzka in the area on 38 minutes, Lewandowski stepped up to slot home the resulting penalty.

After the break, dogged defending by the hosts repeatedly frustrated Bayern.

It was his countryman Pavard who made the points safe on 80 minutes when he headed a Joshua Kimmich corner inside the far post.

Earlier, Cologne striker Mark Uth said that the absence of fans was no excuse for throwing away a two-goal lead in a 2-2 draw with struggling Mainz.

"If you're up 2-0, you have to finish things off -- with or without spectators," fumed goalscorer Uth.

The hosts took an early lead when Uth, on loan from Schalke, converted a penalty with just six minutes gone after the striker was brought down in the area.

With hugs and handshakes banned, and fans excluded from the ground due to the pandemic, the players celebrated with elbow bumps instead.

Cologne added a second goal when Florian Kainz headed home a cross with just over half an hour left.

However, Mainz came roaring back with an hour played as the visitors knuckled down.

Replacement striker Taiwo Awoniyi, who had only been on for five minutes, tapped home from close range for his first Bundesliga goal.

Cameroon midfielder Pierre Kunde floored Cologne and earned a point for Mainz when he beat two defenders and poked the ball past goalkeeper Timo Horn to equalise on 72 minutes.

"It was like street football, a huge game for us," said Mainz sports director Rouven Schroeder.

"For the first game after so many weeks, it was really good. The guys didn't want to be left behind."

The result leaves Mainz on the verge of the relegation places but four points above the bottom three while Cologne are 10th.