Lee Bowyer has been told by Birmingham he will not be offered a new contract at the end of the season and the player says he is undecided whether or not to play on. 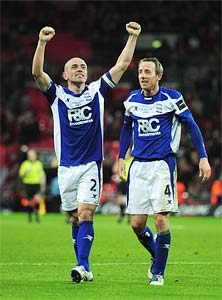 Lee Bowyer has been told by Birmingham he will not be offered a new contract at the end of the season and the player says he is undecided whether or not to play on.

The much-travelled 34-year-old midfielder helped City to win the League Cup by beating Arsenal 2-1 at Wembley on Sunday.

But he already knew before the final that his days at St. Andrew's were numbered.

He believes he can play on for two more years but will quit if he no longer enjoys the game.

"We will see what happens in the summer," Bowker said.

"I am still hungry, I think I have got another couple of years and then...I don't know.

"But, if next summer I wake up one day and I suddenly feel like I don't enjoy it, that will be it."

Bowyer says he had been disapponted not to be given a contract extension, but he insisted that will nto take away from his commitment for the rest of this eason.

"I thought they might give me another year, when it was brought up," he said.

"It won't alter the way I play. I always give my all. I'm the same, no matter where I have been.

"I don't think anyone who I have worked with, or a fan, could say that they have never seen me give 100%.

Comments
Topics mentioned in this article
Football Edgbaston, Birmingham Steven Gerrard Birmingham City Everton Liverpool Chelsea Arsenal
Get the latest updates on ICC T20 Worldcup 2022 and CWG 2022 check out the Schedule, Live Score and Medals Tally. Like us on Facebook or follow us on Twitter for more sports updates. You can also download the NDTV Cricket app for Android or iOS.