Barcelona's Adriano out for 3 weeks with injury

Barcelona defender Adriano will be sidelined for three weeks with a leg injury, dealing another blow to its already thin back line. 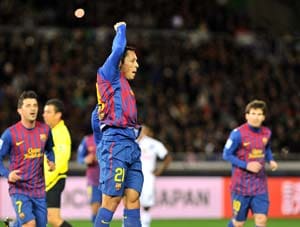 Barcelona defender Adriano will be sidelined for three weeks with a leg injury, dealing another blow to its already thin back line.

Adriano hurt a muscle in this right leg after scoring the opening goal in Barcelona's 3-1 win over Celta Vigo on Saturday.

Coach Tito Vilanova will have to again shuffle his squad to fill out its back line for Wednesday's Champions League game at Celtic with holding midfielder Sergio Busquets also suspended.

Javier Mascherano, Alex Song and 21-year-old Marc Batra could all get the nod.

Barcelona leads the Spanish league after a club-record start of nine wins and a draw in the first 10 rounds.

Comments
Topics mentioned in this article
Football Gerard Pique Villarreal Roma Barcelona Inter Milan Arsenal Carles Puyol Eric Abidal
Get the latest Cricket news, check out the India cricket schedule, Cricket live score . Like us on Facebook or follow us on Twitter for more sports updates. You can also download the NDTV Cricket app for Android or iOS.