Barcelona's Spanish World Cup star David Villa said on Monday he was looking forward to what will be an emotional return to old club Valencia on Wednesday. 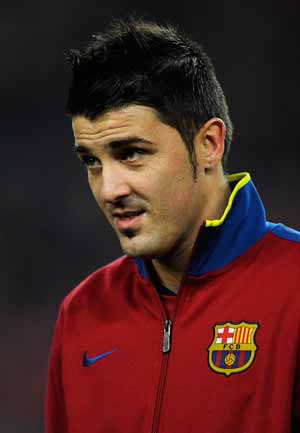 Barcelona's Spanish World Cup star David Villa said on Monday he was looking forward to what will be an emotional return to old club Valencia on Wednesday.

League leaders Barcelona will be aiming to maintain their seven-point lead at the Spanish first division summit when they visit Valencia, who are third in the table but a massive 17 points adrift of Barca.

Villa, 29, spent five goal-packed seasons with Valencia before joining Barcelona for 40 million euros and has scored 16 league goals in a fine debut season, netting in each of his last four matches in all competitions.

"The game against Valencia will be one of the hardest in the league, but it'll be great for me to go back there after all the great times I had there," said Villa.

Barcelona extended their lead over rivals Real Madrid back to seven points over the weekend but Valencia are unbeaten in their last 11 league games and have proved a difficult opponent for Barca in recent seasons.

Barcelona will be without captain Carles Puyol and goalkeeper Victor Valdes due to knee injuries, but Brazilian right back Dani Alves will return from suspension and playmaker Xavi Hernandez is in contention as he recovers from a calf injury.

Valencia, 2-1 winners at Athletic Bilbao on Sunday, are more concerned about staying in front of Villarreal who are four points behind in fourth.

"It is three points we can't afford to let slip from our grasp," said Valencia winger Joaquin.

"We will suffer a lot because they are a great team but we are going to try to impose our style of football. If we can make them feel uncomfortable we have a great chance of winning."

Comments
Topics mentioned in this article
Football Barcelona
Get the latest updates on ICC T20 Worldcup 2022 and CWG 2022 check out the Schedule, Live Score and Medals Tally. Like us on Facebook or follow us on Twitter for more sports updates. You can also download the NDTV Cricket app for Android or iOS.