Diego Costa had a hat-trick by halftime and added one more goal before he was sent off in the 63rd minute. 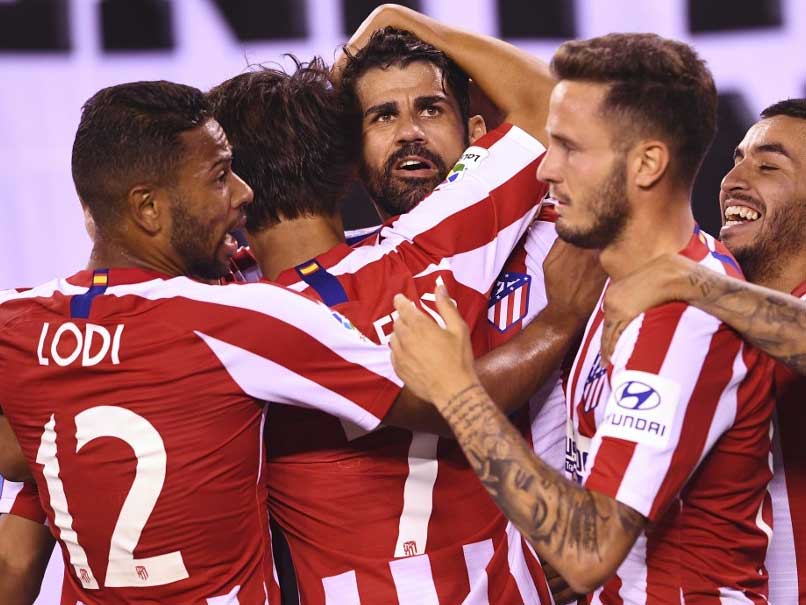 Diego Costa scored four goals as Atletico Madrid embarrassed La Liga rivals Real Madrid 7-3 Friday in a pre-season friendly at MetLife Stadium. Costa had a hat-trick by halftime and added one more goal before he was sent off in the 63rd, when both teams were reduced to 10 men after a testy shoving match. The first meeting outside of Europe between the Madrid rivals proved a dismal night for Zinedine Zidane's Real Madrid, who saw Serbian starlet Luka Jovic hobble off after an awkward collision with Atletico keeper Jan Oblak in the 24th minute.

Zidane can only hope the news on his injury will be better than that on Marco Asensio, who could miss most if not all of the La Liga season after rupturing a knee ligament against Arsenal on Tuesday.

Angel Correa also scored for Atletico, who had run the score to 5-0 at halftime and 6-0 before Real Madrid got one on the scoreboard before a packed house at the East Rutherford, New Jersey, home of the NFL's New York Jets and New York Giants.

Costa set the tone in the first minute. Put through in the area by Felix he fired across his body to make it 1-0.

Felix struck in the eighth, slotting home a ball that was cut back to him by Saul Niguez.

Costa bagged his second to make it 4-0 in the 28th, Saul winning the ball after a poor pass from Real Madrid's Sergio Ramos and sending a pass for Costa.

Costa made it 5-0 on the stroke of halftime, converting from the penalty spot after he was brought down in the area by Isco.

Atletico's lead swelled to 6-0 in the 51st minute when Costa teamed with Felix for his fourth of the night, Felix slotting a pass through Real Madrid's defence for Costa to arc over Keylor Navas.

Eden Hazard helped Real Madrid pull back a goal in the 59th with a cross that Nacho bundled over the line.

Undeterred, Atletico grabbed their seventh goal in the 70th thanks' to a superb solo run by Vitolo, who seized the ball from two defenders and beat two more to score.

Karim Benzema converted an 85th-minute penalty and Javi Hernandez scored in the 89th to trim the deficit, but there was little for Real Madrid to be proud of.

Welsh star Gareth Bale -- reportedly on the verge of a lucrative move to Chinese Super League outfit Jiangsu Suning -- was sent on with less than half an hour remaining but couldn't provide a spark.

Diego Costa Football
Get the latest updates on ICC T20 Worldcup 2022 and CWG 2022 check out the Schedule, Live Score and Medals Tally. Like us on Facebook or follow us on Twitter for more sports updates. You can also download the NDTV Cricket app for Android or iOS.