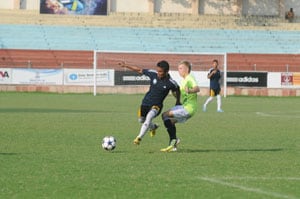 Magurmari High School, Kokrajhar, Assam scripted the biggest upset of the tournament so far with a 4-1 victory over hot favourites Troeschina of Kiev, Ukraine to enter the U-17 Boys' semifinal of the 54th Subroto Cup in New Delhi on .

Ukraine custodian Magdenko Dmutro was sent off during first half injury time for a foul on Assam's Thanil Singh.

Assam will face Reverend Saiaithanga Memorial, Aizawl, Mizoram in the semifinals on October 17.

Assam took control of the game early on, their speedy forwards proving to be quite a handful for the Ukraine defenders. They could have easily taken the lead after 20 minutes but Kapil's free-kick hit the bar.

Assam finally made their dominance count when Basumatary headed in a corner a minute before the break. Assam dominated the second half as well and the ball hardly ever left the Ukraine half of the field.

"I was hoping that my boys would win. But scoring four goals against a team like Troeschina is a nice surprise," Assam coach Biswajit Narzary said after the match.

"We are now confident of the title," he said.

Haryana will face RMSM Vidyalaya from Bishnupur, Manipur in the final on October 17.

Haryana took the lead early on when Jyoti scored in the third minute. Meghalaya hardly troubled their rivals and Haryana could have easily scored a couple of more goals but for some good saves by Meghalaya custodian M Mashli.

Comments
Topics mentioned in this article
Football ASS
Get the latest updates on ICC T20 Worldcup 2022 and CWG 2022 check out the Schedule, Live Score and Medals Tally. Like us on Facebook or follow us on Twitter for more sports updates. You can also download the NDTV Cricket app for Android or iOS.