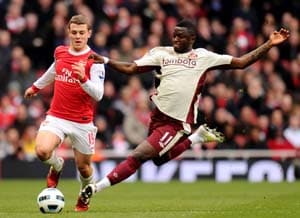 Arsenal's hopes of closing the gap on Premier League leaders Manchester United to just one point were dashed as Arsene Wenger's side were held to a 0-0 draw by Sunderland at the Emirates Stadium on Saturday.

With United not due to face Liverpool until the following day, Wenger's side knew this was a great chance to increase the pressure on Sir Alex Ferguson's side.

But despite dominating the second period and striking the woodwork twice through Marouane Chamakh and Samir Nasri, they were unable to find a match-winning goal.

Having failed to overcome Birmingham six days previously in the League Cup final, Wenger's men were once again found wanting when the stakes were high.

Their next test will come when they travel to face Barcelona in the second leg the last 16 Champions League tie when they will defend a one goal advantage.

The Gunners League Cup hangover had already been partially eased by the time they returned to winning ways last week with the comprehensive 5-0 FA Cup defeat of Leyton Orient.

Manchester United's loss at Chelsea 24 hours earlier had opened up the title race and while Wenger's side were clearly distraught at losing to Birmingham at Wembley, the prospect of a bigger prize was suddenly more real.

To take advantage of United's slip, though, the Gunners knew they had to avoid the kind of setback that has marred an inconsistent season.

And having won just one of their previous five league meetings with Sunderland, they were well aware of the task confronting them as they faced Steve Bruce's side.

Not that the Black Cats arrived at the Emirates Stadium in any kind of form. The Black Cats had lost their previous four games, undermining their ambitions of claiming a place in next season's Champions League.

They quickly showed they were determined to end that run, however, by stifling Arsenal's hopes of establishing an early lead and allowing Wenger to rest key players ahead of the Barca clash.

The visitors were quick to close the home side down, restricting the Gunners to a couple of hopeful early efforts from Nasri and Jack Wilshere whilst offering an occasional threat themselves.

With Cesc Fabregas and Alex Song injured, Wenger had been forced to reorganise his midfield, pushing Wilshere further forward and employing Abou Diaby and Denilson in front of the back four.

Wilshere and stand-in skipper Nasri created the best of the home side's first half openings but there was no doubt Fabregas's drive from the central areas was missed.

Nasri opened up the left hand side of the Sunderland defence with a neat dribble to force a corner from which Nicklas Bendtner directed an overhead kick into the arms of keeper Simon Mignolet.

Then five minutes before the interval, Bendtner was presented with the best chance of the half when Wilshere's chip sent the Denmark striker beyond the Sunderland back four but the forward was again denied by Mignolet.

Arsenal needed to up the tempo in the second period but there were few signs the Sunderland defence would wilt.

Wenger introduced Chamakh and Tomas Rosicky to strengthen his side's attacking options but the longer the game wore on, the more desperate Arsenal's attacks became.

Andrey Arshavin had an excellent chance to ease home nerves in the 63rd minute when he shot straight at Mignolet after being teed up by Chamakh.

Chamakh later headed against the bar after Nasri's free kick had been tipped onto the woodwork by Mignolet.

The visitors were clearly exhausted by their efforts as the game dragged into the closing stages but substitute Danny Welbeck -- on loan from Manchester United -- almost produced a shock winner five minutes from time with a turn and shot that was kept out by an excellent save from Wojciech Szczesny.

Comments
Topics mentioned in this article
Football Steven Gerrard Everton Liverpool Chelsea Birmingham City Arsenal Sunderland
Get the latest updates on ICC T20 Worldcup 2022 and CWG 2022 check out the Schedule, Live Score and Medals Tally. Like us on Facebook or follow us on Twitter for more sports updates. You can also download the NDTV Cricket app for Android or iOS.