Arsenal Knocked Out of FA Cup After Loss to Watford

Arsenal's loss to Watford on Sunday was their first defeat in the FA Cup since a 1-0 fifth-round defeat by Blackburn Rovers in February 2013. 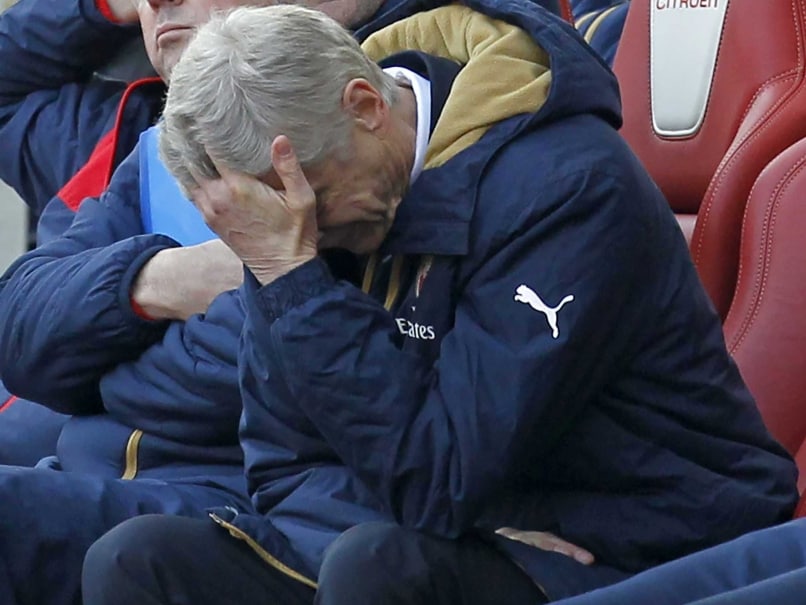 Arsenal's manager Arsene Wenger reacts after his team were knocked out out the FA Cup by Watford.© AFP
London:

Triumphant in the FA Cup in 2014 and 2015, Arsenal were beaten in the competition for the first time since a 1-0 fifth-round defeat by Blackburn Rovers in February 2013. (Chelsea F.C. Crash Out of FA Cup)

It left them facing the prospect of a trophyless season, with Arsene Wenger's side -- booed off at the final whistle -- eight points off the pace in the Premier League and 2-0 down to Barcelona ahead of Wednesday's Champions League last 16 return leg at Camp Nou.

The status of that tie encouraged Wenger to field his strongest available line-up against Quique Sanchez Flores's Watford, who are currently 14th in the Premier League.

Yet while the presence of Alexis Sanchez and Mesut Ozil helped Arsenal dominate the opening 45 minutes, the home side were unable to find the cutting edge that would have turned their superiority into goals.

Watford were forced to defend in numbers from the opening moments and were fortunate to benefit from a marginal offside call when Olivier Giroud finished smoothly from Sanchez's pass.

But Arsenal had only themselves to blame for their failings in front of goal, with Mohamed Elneny guilty of missing two excellent opportunities to open the scoring.

The Egypt midfielder found himself in space inside the penalty area in the 30th minute after being picked out by Per Mertesacker's pass, only to lose composure and slice his shot well wide.

Then four minutes before the interval Elneny was presented with a second good shooting opportunity, but again hurried his effort, this time firing well over.

Watford could largely be satisfied with their first-half defensive display and had Ighalo taken a more direct approach rather than attempting to play in captain Deeney, the visitors might have gone ahead.

They also had cause to feel aggrieved at referee Andre Marriner's failure to take action against Gabriel for a two-footed lunge on Deeney that could easily have earned the Arsenal centre-back a red card.

But any frustration they felt quickly disappeared at the start of the second half when Flores's side did what Arsenal had failed to do and made the most of a rare scoring opportunity to take a 50th-minute lead.

Giroud had already added to the growing list of Arsenal misses by wastefully heading over two minutes into the second half when Ighalo collected Deeney's flick-on and easily turned Gabriel before poking the ball past goalkeeper David Ospina.

The Nigeria forward should have added a second goal when he stood on Nathan Ake's low cross just six yards from goal.

That miss might have proved costly had Giroud made more of another chance a minute later when his near-post effort was saved by Costel Pantilimon.

Instead it was Arsenal who were left to rue the missed opportunity when Watford responded immediately, launching another attacking move that culminated in Deeney holding the ball up excellently before teeing up Guedioura to thrash a rasping shot into Ospina's top-left corner.

Welbeck halved the deficit with a well-worked goal, curling home after a neat one-two with Ozil, but then spurned two chances to equalise in the dying moments.

Teed up by Kieran Gibbs, he failed to adjust his feet quickly enough and shot wide of an open goal, while another chance saw him burst into the box, only to toe his attempted lob well wide.

Comments
Topics mentioned in this article
Arsenal Watford Odion Ighalo Olivier Giroud Danny Welbeck Football
Get the latest updates on ICC T20 Worldcup 2022 and CWG 2022 check out the Schedule, Live Score and Medals Tally. Like us on Facebook or follow us on Twitter for more sports updates. You can also download the NDTV Cricket app for Android or iOS.