Arsenal needed a Carlos Vela strike to salvage a 1-1 draw against a determined Hangzhou Greentown on Saturday in a friendly against the Chinese Super League side. 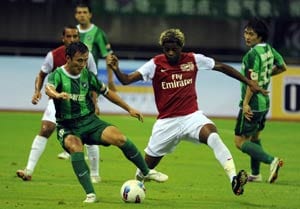 Arsenal needed a Carlos Vela strike to salvage a 1-1 draw against a determined Hangzhou Greentown on Saturday in a friendly against the Chinese Super League side.

Hangzhou Greentown's Sebastian Vasquez put the home side ahead in the seventh minute after some sustained early pressure on the Arsenal goal.

Vela equalised in first-half injury time to spare the Gunners' blushes and despite changing gears in the second half they were unable to come away with a win.

Arsenal are in China for the first time since a pre-season friendly match in Beijing in 1995.

On the second stop of their Asian tour, they were playing in Yiwu, 285 kilometres (180 miles) south of Shanghai, a market city best known for supplying Britain's high street budget stores - known as 'pound shops'.

"I was surprised by the level of the Chinese team tonight," Wenger told reporters after the game.

Arsenal stepped up the attack after half-time but despite several efforts led by Theo Walcott was unable to pull ahead.

The Gunners have trained in Austria for every season since 2001, but are Asia this year to expand the club's brand and fan base in the lucrative market.

Arsenal were returning to Europe on Saturday night after beating Malaysia XI 4-0 on Wednesday.

Comments
Topics mentioned in this article
Football Arsenal Carlos Vela
Get the latest Cricket news, check out the India cricket schedule, Cricket live score . Like us on Facebook or follow us on Twitter for more sports updates. You can also download the NDTV Cricket app for Android or iOS.