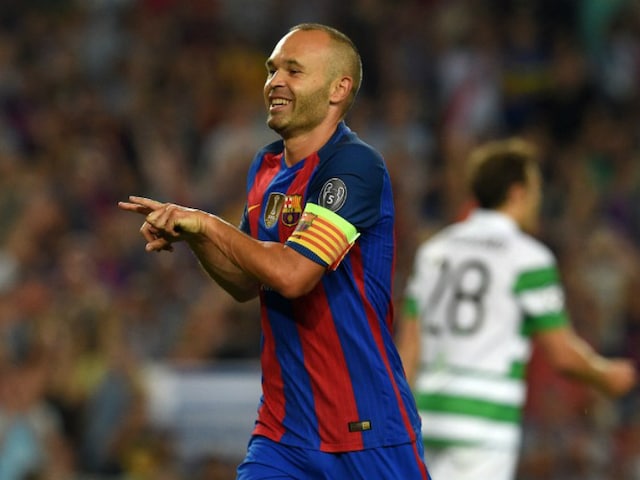 Andres Iniesta has played over 600 first-team games for Barcelona since making his debut in 2002.© AFP

Barcelona captain Andres Iniesta has said he wants to stay on at the Catalan club "for a long time" after his current contract with the club expires in 2018.

"In 2018 my contract ends and my desire is to continue, the whole world knows this, it is no secret. But my level of performance will determine if I can stay at Barca. I hope it will be for a long time," the 32-year-old said in an interview with sports daily Mundo Deportivo.

Barcelona recently reached a deal to extend the contract of Uruguay striker Luis Suarez to June 2021. His previous deal was due to expire in 2019.

In October, the club also extended the contract of Brazilian superstar Neymar until 2021 and they have already started talks to seal a new deal with Lionel Messi.

Along with Messi, Iniesta is Barcelona's most decorated player ever with 29 trophies, but he is even more loved across Spain for his winning goal in the 2010 World Cup final against the Netherlands.

Iniesta is second behind only former teammate Xavi Hernandez as the player to have made most Barca appearances.

He is also hopeful coach Luis Enrique will renew his contract with Barcelona when his current deal expires at he end of the season.

"He is very motivated, I hope we can remain together and keep celebrating things, which is what we all want," Iniesta said.

Barca have also already tied down Sergio Busquets and Javier Mascherano to contract extentions this year.

Comments
Topics mentioned in this article
Football Andrés Iniesta Xavi Lionel Messi Barcelona Luis Suarez
Get the latest updates on IPL 2020, check out the IPL Schedule for 2020 and Indian Premier League (IPL) Cricket live score . Like us on Facebook or follow us on Twitter for more sports updates. You can also download the NDTV Cricket app for Android or iOS.