Both Arsenal and Manchester United earned 2-0 wins over Hull City and Watford respectively in the Premier League on Saturday. 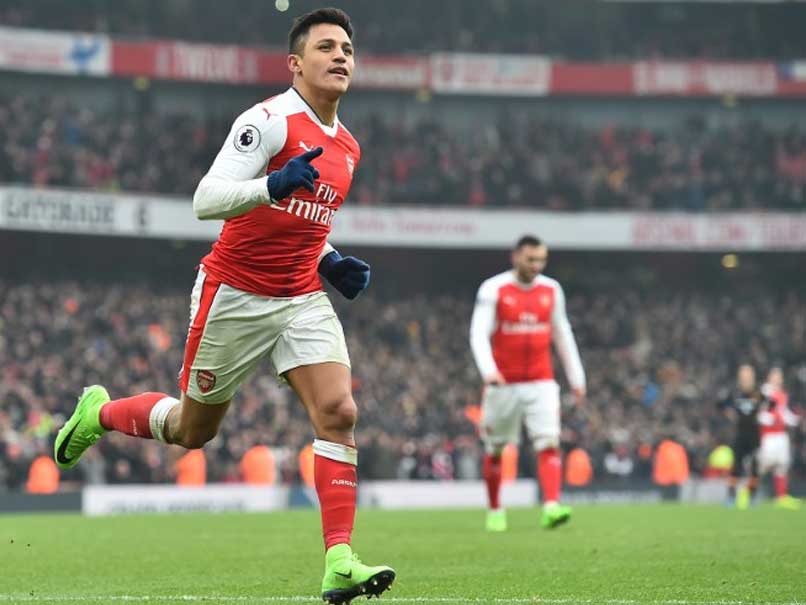 Alexis Sanchez scored a brace for Arsenal against Hull City in Premier League on Saturday.© AFP

Alexis Sanchez brought manager Arsene Wenger some breathing space with a brace of goals as Arsenal overcame Hull City 2-0 in the Premier League on Saturday. The Chilean forward contentiously scored with his hand in the 34th minute and netted a stoppage-time penalty to get Arsenal back to winning ways following successive defeats by Watford and leaders Chelsea. They provisionally climbed to third place, nine points behind Chelsea, while Manchester United moved to within a point of the Champions League places by beating Watford 2-0.

Anthony Martial marked his return to the starting XI by scoring one goal and setting up another for Juan Mata as Jose Mourinho's side leapfrogged Liverpool, who host second-place Tottenham Hotspur later on Saturday.

Spurs sit above Arsenal on goal difference, with Manchester City a point back in fourth place ahead of their trip to Bournemouth on Monday.

United trail City by a point, having played a game more, with Liverpool two points further back in sixth.

Following his side's win over Hull, Wenger dismissed a claim by former Arsenal striker Ian Wright that he had admitted his time at the Emirates Stadium was coming to an end.

"I didn't give any indication about my future," Wenger told reporters.

"You know I appreciate very much that you want me to rest, absolutely. But I am not ready for that yet."

Sanchez put Arsenal ahead in controversial fashion, the ball hitting his right hand and rebounding into the net after his close-range shot had come back off Hull goalkeeper Eldin Jakupovic.

The goal was allowed to stand by referee Mark Clattenburg and another handball, this time spotted by the officials, gifted Sanchez his second goal in stoppage time.

Sam Clucas was dismissed for blocking Lucas Perez's goal-bound header and Sanchez dispatched the spot-kick for his 17th goal of the campaign.

After not featuring in United's three previous league games, Martial gave Mourinho a reminder of his ability by inspiring his team to victory over Watford.

The French forward set up United's opener in the 32nd minute at Old Trafford with a low cross that was tapped in by Mata.

Martial got on the score-sheet on the hour, running onto Zlatan Ibrahimovic's pass, cutting inside and coolly beating Heurelho Gomes at his near post.

Seventh-place Everton squandered a chance to close on the teams above them after being held to a 0-0 draw at sixth-bottom Middlesbrough.

Sunderland remain bottom of the table after Southampton's new Italian striker Manolo Gabbiadini scored a slick brace in a 4-0 win at the Stadium of Light.

Jason Denayer also put through his own goal before Shane Long completed the scoring in added time.

Second-bottom Crystal Palace were also beaten, Joe Allen scoring in the second half to give Stoke City a 1-0 win that saw Mark Hughes's team climb to ninth.

Gareth McAuley was credited with a stoppage-time equaliser for West Bromwich Albion in a 2-2 draw at West Ham United.

After Nacer Chadli put West Brom ahead in the fifth minute, West Ham hit back through Sofiane Feghouli and Manuel Lanzini, only for McAuley to level at the death.

Comments
Topics mentioned in this article
Arsenal Manchester United Chelsea Hull City Tigers Watford English Premier League Football
Get the latest updates on ICC T20 Worldcup 2022 and CWG 2022 check out the Schedule, Live Score and Medals Tally. Like us on Facebook or follow us on Twitter for more sports updates. You can also download the NDTV Cricket app for Android or iOS.