Not many reckoned Costa Rica would last this World Cup but the team has not only survived but flourished courtesy spirited football.The team though now faces a dominant Dutch side in the quarterfinals. 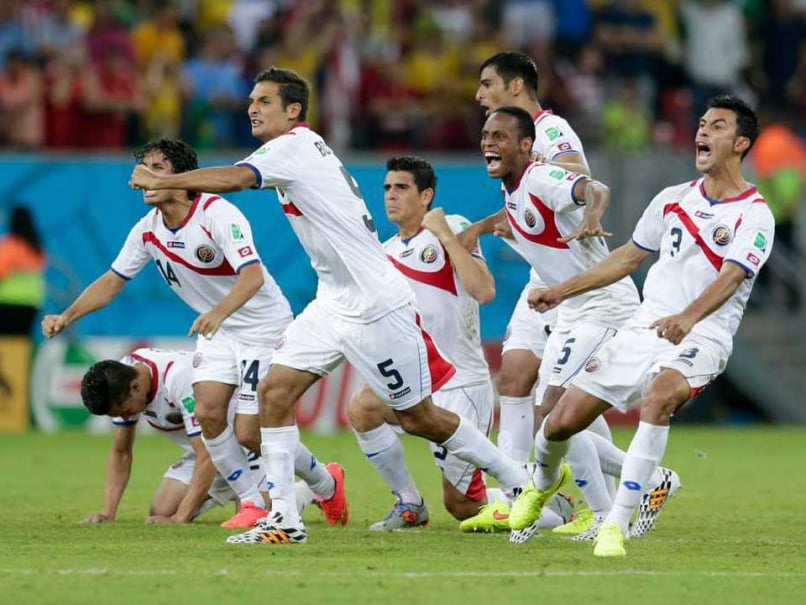 Costa Rica players react after Michael Umana scored during a shootout after regulation time in the World Cup round of 16 soccer match between Costa Rica and Greece at the Arena Pernambuco in Recife, Brazil, Sunday, June 29, 2014. Costa Rica defeated Greece 5-3 in penalty shootouts after a 1-1 tie.© AP
Salvador:

The irresistible fairytale of Costa Rica faces a day of reckoning against Louis van Gaal's hard, calculating Dutch side on Saturday in the Brazil World Cup's most unlikely quarter-final.

Few believed that Costa Rica, a small Central American country with an undistinguished footballing record, would still be standing, especially after a group including Italy, England and Uruguay.

Yet "Los Ticos" shocked Uruguay and Italy to top a group bracketing three World Cup winners, before battling past Greece on penalties after playing an hour with only 10 men.

Despite the talents of Joel Campbell and Bryan Ruiz in attack, it has been more a case of grit and organisation than Latin flair with Jorge Luis Pinto's side conceding only two goals so far and scoring five.

Costa Rica have already outdone their best World Cup performance, reaching the last 16 in 1990, much to the jubilation of fans back home whose celebrations have stretched long into the night.

Whether the parties continue depends on the Netherlands, whose hard-nosed approach and late comebacks have already dashed the dreams of millions of fans in Chile and Mexico.

The 2010 finalists began the World Cup with a heady 5-1 rout of reigning champions Spain, and then came from behind to beat Australia 3-2.

Objections surfaced over their counter-attacking style after the 2-0 win against Chile, which was achieved with two late goals and with veteran forward Dirk Kuyt playing left-back.

And much sympathy for the Oranje evaporated when Arjen Robben, after earning the injury-time penalty that sank Mexico 2-1, admitted diving during the last-16 tie.

After a furore over those comments Robben will not expect any favours from Uzbek referee Ravshan Irmatov, who is yet to give a penalty in his eight-game World Cup career.

But the Bayern Munich flyer's duel against Keylor Navas, one of the World Cup's goalkeeping heroes whose one-handed penalty stop denied Greece, will be closely watched.

Navas, who is expected to recover from a shoulder injury, can also expect a work-out from Robin van Persie with emerging PSV Eindhoven star Memphis Depay likely to figure later on.

In a blow to the Dutch, midfield enforcer Nigel de Jong is out with a groin injury, meaning a reshuffle for the Manchester United-bound Van Gaal.

But the coach has shown cool tactical nous and opportunism, first by redeploying Kuyt and also using the World Cup's first cooling break to switch tactics against Mexico.

Costa Rica have problems in defence with centre-back Oscar Duarte -- who scored a brilliant header against Uruguay -- suspended and the left-sided Roy Miller an injury concern.

Up front, expect another starring role from Campbell, 22, whose eye-catching tournament could prompt Arsenal to recall him after loan spells at Lorient, Real Betis and Olympiakos.

Playing behind Campbell will be the assured Ruiz, 28, completing an attacking duo which has yielded three of Costa Rica's goals so far.

The Fulham forward said Costa Rica were capable of shocking the Dutch -- a seismic upset for the World Cup, but one which would find favour with neutrals and romantics.

"Saturday's game is like a final for us, but we don't want to stop there," said Ruiz.

"Holland is a great team, but I have to be honest and say that we have a good chance of beating them. But we have to take care of a lot of details if we want to win."

The eventual winner at Salvador's Fonte Nova Arena will play either Argentina or Belgium for a place in the July 13 final in Rio de Janeiro.